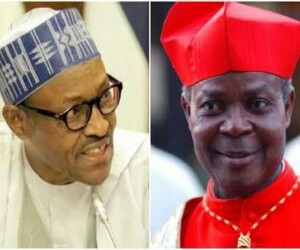 A former Archbishop of the Catholic Church in Lagos, Anthony Cardinal Okogie, has asked President Muhammadu Buhari to renounce the presidential seat following failure to secure the lives and property of Nigerians.

He accused the President of failing to stop killings perpetrated by Fulani militant herdsmen.

“You therefore have the most important decision of your career to make. And that decision is this: Are you for Nigerians or not?”

He said, “The number (of Nigerians) killed under your watch, Mr. President, provides more than convincing evidence that the government you lead has failed to secure our lives. You are the Commander-in-Chief of the Armed Forces.

“If more than three years into your administration, you have been unable to stop these killings, why don’t you seriously consider the option of an honourable renunciation of the presidential seat?

“One of the major factors behind the patent failure of your government is the fact that you are surrounded by men and women who fail to tell you the truth about Nigeria and who shield you from seeing what is happening to the ordinary Nigerians.

“Instead of assisting you in the governance of this country, they insult those whose dissenting opinions you need if you are to succeed.

“How does one explain the fact that under your watch as the Commander-in-Chief, agencies established to maintain law and order, instead of protecting innocent citizens of this country, dissipate their energy running after members of opposing parties? Do you call that democracy?

“No right-thinking person would advocate letting anyone off who has committed a crime. No one is above the law, not even you, Mr. President. That is why the Constitution provides for a process of removing the President.

“That is why the point must also be made that those who contravene the laws of Nigeria be brought to book, irrespective of their political, regional, ethnic or religious affiliation. But the sad reality is: under your watch, that is not what is happening.”

The former President of the CAN faulted the Federal Government for failing to arrest and prosecute leaders of the Miyetti Allah Cattle Breeders Association of Nigeria, who had on several occasions allegedly claimed responsibility for the various attacks on communities.

“Nigerians are baffled that he has yet to be arrested. Where were those responsible for our security at a time they were needed most?

“Dear President Buhari, I am compelled to write to you again because, since the bloodshed of the first day of this year, there has been more bloodshed in Zamfara State and in the Middle Belt.

“While all this happened during the national convention of your party, it would be unfair to insinuate that the latest round of killings had anything to do with your party.

“However, it was scandalous that at about the time innocent Nigerians were being slaughtered like cows in Plateau State last weekend, some members of your party were dancing and feasting at your party’s convention in Abuja, while some were throwing chairs at each other, and some others were exchanging blows.

“That, in itself, points to the absence of democracy in your party, as is the case in virtually all the political parties in Nigeria.”

Okogie also blamed the President for treating the herdsmen with kid gloves, saying, “You described what is going on as a clash between herdsmen and farmers. If the identities of these criminals are not hidden, why has the Nigerian intelligence community, under your watch, failed to prevent them from shedding blood?”

Meanwhile, according to the Punch, prominent Emirs including Emir of Katsina, Alhaji Abdulmumuni Usman; the Emir of Zazzau, Alhaji Shehu Idris; and the Lamido of Adamawa, Alhaji Muhammadu Musdafa, have been questioned by some groups for not doing enough as patrons of MACBAN to stop the persistent killings by suspected Fulani herdsmen.

The groups – including the Niger Delta Youth Parliament, Ijaw Youth Congress, the Federation of Middle Belt People and the Arewa Youth Forum – said the traditional rulers were not doing enough to engage members of MACBAN on the issue.

The groups said they were bothered about the lingering crisis, especially with the recent massacre carried out by suspected killer Fulani herdsmen in Plateau State, which left 86 persons dead.

The President of the Ijaw Youth Congress Worldwide, Mr. Eric Omare, said the northern traditional leaders were not doing enough to stop the killings by suspected members of the Miyetti Allah.

He said, “If they had been doing what ought to be done, the killings would have been abated by now. They have failed in their leadership responsibility.

“They need to show more leadership by stepping up in their responsibility. They need to do more in engaging the Miyetti Allah and finding a lasting solution to the ongoing crisis.”

The National Coordinator of the Niger Delta Youth Parliament, Mr. Imoh Okoko, also said it was wrong for the patrons of the Miyetti Allah to be silent on suspected herdsmen killings.

Okoko explained that the silence of the traditional rulers could mean they were sponsoring the dastardly acts by the herdsmen.

He argued that the patrons should either renounce their patronship of MACBAN or caution the members against shedding blood, allegedly.

Okoko said, “It is shocking that such killings are taking place. If somebody accepts that he is the patron of an association that has owned up to killings, then the person should talk to the association to stop the killings.

“If you are a patron of a violent group, you should denounce the group or talk to them so that they can change. The Fulani herdsmen are also embarrassing President Buhari.”

Okoko further suggested that if the Niger Delta Militants could have stopped bombing during the former President Goodluck Jonathan-led government, President Buhari and the northern traditional rulers also ought to have prevailed upon Fulani herdsmen to stop the killings, being of the same extraction.

He said, “When Jonathan was the President, the Niger Delta Militants stopped bombing. It is stupid for anybody in the world to compare the precious lives of human beings to those of cows.

“The government should also hold the patrons of the violent group responsible because they are keeping silent and their silence may be interpreted as sponsoring the killings.”

The Coordinator of the Federation of Middle Belt People, Mr. Manasseh Watyil, argued that it might be impossible for the patrons to seek an end to the killings due to their personal interests.

He said, “They are the patrons of herdsmen and they have three cardinal objectives. First, they are fighting a jihad. Second, they are chasing farmers away from their farms to have enough grazing areas.

“Third, they want to maintain power as they claim to have the monopoly of rulership. If they are able to capture the Middle Belt down to the South, they would have got Nigeria an Islamic State.”

Although the National President of the Arewa Youth Forum, Alhaji Gambo Gujungu, said Buhari should be solely held responsible for the killings, he stated that the Miyetti Allah patrons also ought not to have been silent on the issue.

“They (patrons) should come out to address the situation,” he said.

However, the President of the Arewa Youth Consultative Forum, Alhaji Yerima Shettima, said it would be wrong to blame the Miyetti Allah patrons for the killings.

He said, “They are doing enough, especially in a country where the government is not doing enough. You know, the traditional rulers are not political leaders, so their efforts are limited.

“And let us not forget that there are many factions in the Miyetti Allah today. Personally, I know the Sultan of Sokoto has been working well with other traditional leaders to end the crisis.”

In the meantime, the Ohanaeze Ndigbo, has again asked President Buhari to declare the killer herdsmen as a terrorist organisation.

In a statement, the Special Adviser to the President General of Ohanaeze Ndigbo on Media and Publicity, Chief Emeka Attamah, said the proscription could bring a lasting solution to the killings.

“While the Federal Government proscribed the Indigenous People of Biafra, a harmless organisation, the Miyetti Allah, who has openly claimed responsibility for most of the killings, has been going around unscathed,” he said.

The Christian Association of Nigeria has berated President Buhari over his handling of the bloodshed across the country, stating that he lacked the political will to bring the perpetrators to justice.

The body identified the MACBAN as the brains behind the killings in the Middle Belt.

Pastor Adebayo Oladeji, Special Assistant (Media and Communications) to CAN President, Rev. Samson Ayokunle, said, “Even the most foolish person in this country will know that the Buhari administration has been showing apathy concerning security of lives and property in this country, most especially the atrocities being perpetrated by the Fulani herdsmen under the leadership of MACBAN.

“Here is an association that is worse than the worst terrorist group, yet the President has refused to proscribe them as terrorists.

“Anywhere the killers strike in Benue, Taraba, Adamawa, Zamfara, Plateau, he would say the perpetrators shall be brought to book and no one has been brought to book. It is clear this government lacks the political will to handle Miyetti Allah atrocities and the earlier we rescue the nation from Buhari, the better for us.”