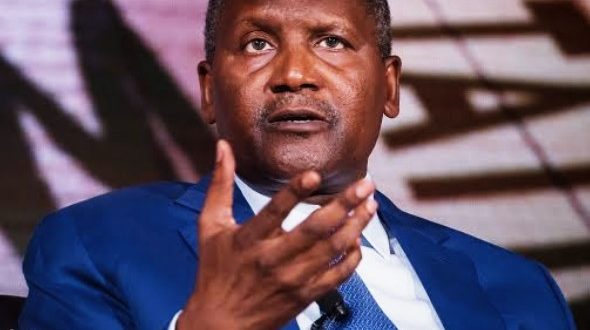 BUA Warns Dangote To Stay Clear Of Obu Mines Or Face Contempt Of Court, Orders Group To Refill Trenches and Remove Its Excavators From Site

BENIN CITY: BUA Group has warned Dangote Group to stay clear of Obu Mines and also within three days remove its excavators and fill trenches it used to barricaded the entrance to the site or face contempt of court proceedings.

In a statement by BUA Group, it said, “Dangote in its not so surprising tactic and in total disregard for the court and rule of law has laid siege on BUA’s Obu mines Okpella by placing excavators and creating trenches at the entrance to effectively prevent BUA Vehicles from operating at the mining sites even after a competent Federal High Court in Benin recently granted BUA rights over the mines.”

BUA Group in its bid to draw public attention to the Dangote’s illegal self-help measures, warned Dangote to restore access to its mining sites, by refilling the trenches and removing their excavators, within three days or it will institute contempt proceeding against the Dangote Group and Patrick Omokagbor, an employee of the Dangote Group who coordinated the contemptuous act, acting on the instruction of Devakumar Edwin – an Indian and a Director of the Dangote Group.

The company further urged Dangote Group to obey the rule of law which is the pillar and foundation of any democracy noting that no one is above the law no matter how highly placed, powerful or influential.
BUA also advised Dangote to Appeal the court’s judgement instead of engaging in illegal tactics.

The statement reads; “BUA Group is set to institute contempt of court proceedings against Dangote Group, Dangote Cement and two of its employees after the company flouted the recent judgement of the Federal High Court in Benin which granted BUA the rights to peaceful possession of its Obu Mines Okpella pending the determination of the other two suits before it.

“BUA wishes to draw the attention of the general public and the relevant authorities to the brazen attempt of the Dangote Group to frustrate a recent judgment of a Federal High Court, Benin in Suit No. FHC/B/CS/101/2017: BUA v. IGP & Ors, in a bid to deprive the BUA Group of the fruit of its successful litigation.

“It would be recalled that BUA instituted the aforementioned Suit in 2017 following the audacious and unlawful disruption of BUA operations at the mining sites in Obu, Okpella, Edo State by the Respondents in the Suit (the Nigeria Police, Dangote Industries Limited, and Dangote Cement Plc).

“BUA Group approached the Court to protect its fundamental right to peaceful possession of the mining sites and specifically applied to the Court for an order restraining the Respondents from further interfering in any manner whatsoever with BUA’s operation of the mining lease sites.

Subsequently, an order of the court was granted restraining the 1st and 2nd Respondents (The Police) as well as the 3rd and 4th Respondents (Dangote Industries & Dangote Cement Plc) from interfering with BUA operations in the mining sites, on 28th May, 2020. The judgment of the court is very clear and explicit as the court ruled inter alia:

“That an order for an interim injunction is hereby granted against the 1st and 2nd Respondents (the Police) and the 3rd and 4th Respondents who are hereby restrained from interfering in any manner what so ever with the said mining lease site pending the determination of the 2 pending suits No. FHC/B/CS/7/2016 & FHC/B/CS/74/2016 before Honorable Justice Ajoku of the Federal High Court Benin accordingly.”

“However, in total disregard of the judgment of the Court and of the rule of law, on 15th June, 2020, the Dangote Group commenced excavation and dredging of the access road and surroundings to the mining site, which the Court had hitherto restrained it from; thereby creating huge trenches to effectively prevent BUA Vehicles from operating at the mining sites (a major disruption and interference with BUA’s possessory rights). Mr. Patrick Omokagbor, an employee of the Dangote Group, coordinated the contemptuous act, acting on the instruction of Mr, Devakumar Edwin – an Indian and a director of the Dangote Group. Please see attached pictures of the trenches dug by the Dangote Group.

“It is imperative to note that the resort to self-help by the Dangote Group is not a one-off occurrence and is instead a continuous, relentless and incessant endeavor to undermine the judicial process, which BUA has submitted to. Recall that prior to the Dangote Group disrupting the operations at the mining sites in 2017, it had approached the Courts in 2016, for a restraining order against BUA in Suit No. FHC/B/CS/74/2016 – Dangote Industries Limited & Anor. v. BUA International Limited & Ors, that was initially granted ex parte, but set aside by the Court upon challenge by BUA. It was therefore after the unsuccessful sojourn to Court that the Dangote Group resorted to the illegal self-help measures to stop operations at the mining sites.

“BUA wishes to reiterate its position that no one should be above the law, no matter how highly placed, powerful or influential, as the rule of law is the pillar and foundation of any democracy. The appropriate remedy available to a party disgruntled by the judgment of Court is to file an Appeal; a right that the Dangote Group has already exercised

“We hereby demand that the Dangote Group immediately restore the access to the BUA mining sites, by refilling the trenches and removing their excavator, within Three (3) days from date of this notice, failing which BUA shall commence contempt proceedings against the Dangote Group and the 2 named officials – Edwin Devakumar and Partrick Omokagbor”.