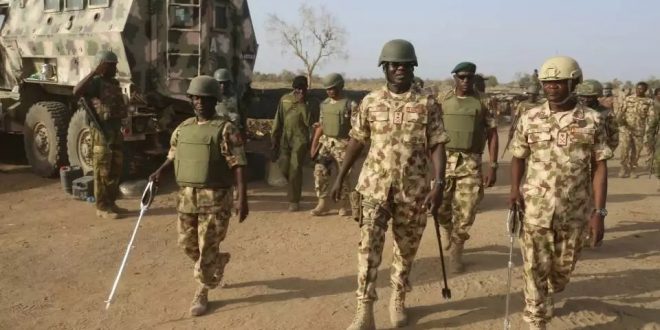 The convoy of the Chief of Army Staff, Lieutenant General TY Buratai was intercepted by armed bandits/armed robbers at midnight of Saturday, May 5, 2018 while on a routine tour of operational areas by the Nigerian Army to curtail the activities of evil men across the country.

The incident reportedly took place along Numan – Yola Road at about 11.30 pm on Saturday, May 5.

The bandits who mounted roadblock where the COAS’ convoy ran into were reportedly on their daily operation of attacking innocent Nigerians.

Recall, officers and men of the Nigerian Army were warned by Buratai against using social media to air their grievances or discussing operational strategies which could be injurious to the country’s national security.

Buratai issued the warning while speaking during an Officers Office Management and Documents Security Workshop at the command officer’s mess in Abuja on Wednesday, May 2. P

The army boss was represented by the chief of policy and plans, Major General Rasheed Yusuf. He stated that the army has well-established channels to address complaints, adding that resorting to social media to air grievances is highly prohibited.