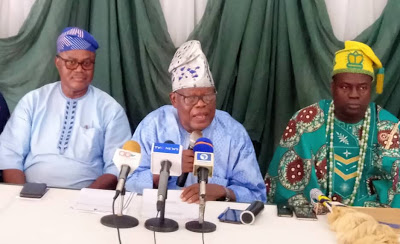 ABEOKUTA: People in the border communities in Ogun State have described the closure of border by the Federal government as an avenue towards colossal losses and incalculable pains in the communities.

The federal government had since 20 August, 2019 placed a barn on importation of goods from other country through the border.

They registered their grievances through Coalition of the Ogun West Consultative Forum (OWECOF), a body comprising well meaning people of Yewa in Ogun West Senatorial District who serve as mouthpiece for the entire people of Yewaland, saying that men of Nigeria Customs Service (NCS) have made life more miserable for them under the guise of upholding the presidential ban order on petroleum.

The group spoke through the Asiwaju of Yewaland, Professor Anthony Asiwaju, during a “Press Briefing On Situation At Border Communities In Ogun State”, held on Thursday November 28, 2019 at the Press Centre, Iwe-Iroyin, Abeokuta, Ogun State capital.

Explaining the ordeal of the communities, Professor Asiwaju explained that the border closure is a blatant discrimination against law-abiding Nigerians whose home base and residence are located in the affected localities

He equally lamented that the closure has affected the circulation of petroleum products on which the machinery on the farm has depended, saying petroleum movement by 20 kilometers to border communities has brought untold economic hardship to innocent people living areas that have nothing to do with economic sabotage popularly referred to as smuggling.

Asiwaju said “The border closure enforcement has been made to adversely affect movement of locally produced fresh fruit tomatoes, corn, yams and lafun (cassava flour) and cocoa from border area on the Nigerian side of the border to Yoruba traditional periodic markets in Abeokuta and Lagos.

“To the regular sufferings from infrastructural deprivation and political marginalisation, the people in border communities of Ogun State are now having to stand a wide range of human rights abuses”, he added.

On the extension of the closure, Prof. Asiwaju said, “The recent extension of the scope of the border closure is the ban on circulation of petrol and petroleum products within 20 kilometres of the border. This would lead to further losses for legitimate economic activities, such as iron welding, saw milling, hair dressers who depend on generators and therefore fuel for their operations”.

Emphasizing that the presidential order has criminalized the entire peace loving people of Ogun West Senatorial district who are principally affected by the order, saying, “The order is also having an economic hardship on the people of the area as well as its attendant loss of lives.”

The Professor alleged that security operatives saddled with the responsibility of enforcing the presidential order on petroleum have become overzealous and resorted to killing innocent people under the guise of chasing petroleum smugglers.

Asiwaju alleged that the Customs’ officials have always infringed on the rights to free movements of persons and goods as people of the border communities are always subjected to series of inhuman treatments whenever they ride on motorcycles either to market places or inter-communities or events.

His words, “The regular suffering infrastructural deprivation and political marginalisation, the people of the territorial authorities and communities in border areas of Ogun state are now having to stand a wide range of human abuses”.

Six traditional rulers, including the Onihunbo of Ihunbo kingdom, Oba Joseph Adesiyan, renowned historian; Prof. Anthony Asiwaju, and over a dozen of communities said evacuation of farm produce, and poultry products by local farmers have become impossible as overzealous border task force harassed them under the guise of Presidential Order.