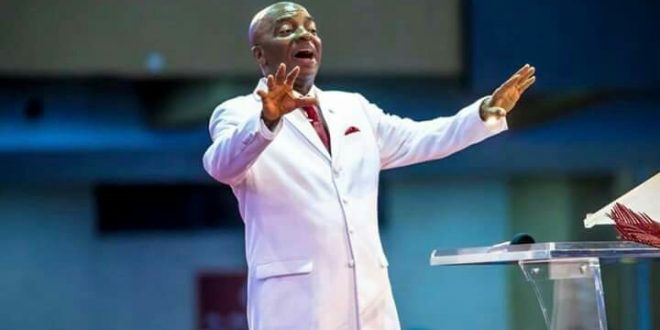 StarTrend May 8, 2019 HEADLINE, NEWS Comments Off on Bishop Oyedepo Church Under Tension As Boko Haram Makes Another Fearful Demand After Doing This To Members of His Church 99 Views

The Punch News reports that there is an indication that the Boko Haram insurgents are demanding a ransom before releasing members of the Living Faith Tabernacle Church (Winners Chapel) they kidnapped two weeks ago.

It was reported that gunmen suspected to be members of Boko Haram kidnapped a member of the National Youth Service Corp, (NYSC), Ibrahim Amuta and other three members of the church on their way to Chibok to distribute relief items to internally displaced persons, (IDP).

Amuta’s housemate, identified to be, Success Ezeanya, whose tweets about the abduction went viral on Saturday, on Monday told the PUNCH News that a member of the church revealed that the Boko Haram was demanding, N200 Million before they grant his release, while another source states from Maiduguri said Boko Haram demanded N100 Million.

Ezeanya in his statement said the family of Amuta is in constant communication with the church as to how he would be released.

The PUNCH learnt that Amuta served as a vigilante. Amuta’s colleague, Ezeanya told The PUNCH that the abducted NYSC member had gained experience combating crime as a member of a vigilante group in Jos, Plateau State.

He had tweeted, “Abraham Amuta is a corps member serving in Maiduguri. He was abducted by Boko Haram two weeks ago. He went for evangelism with a pastor from his church – Living Faith. He is an only son. Let’s not forget him in our prayers.

“He is a Batch B, stream 1 corps member serving in Maiduguri, Borno State. It’s been over two weeks now since he went missing in Maiduguri. Some people claiming to be Boko Haram have called and claimed to have abducted him. Please retweet until the Federal Government sees this.”

Speaking with one of our correspondents on Monday, Ezeanya described the abducted NYSC member as audacious.

He said, “We were just lodge-mates. I think he is 27 or 28 years old. He has a barber’s in the lodge where we go to cut our hair. I was in Batch A but I’ve passed out, although I’m still in Borno still searching for a job as a Mass Communication graduate.

“AB, however, is in Batch B. I would always interact with him whenever I would go to cut my hair at his place. AB is a very strong guy; the guy has guts. The kind of things he says, he’s a different kind of person.

“He would always talk about his experience as a security agent in Jos (Plateau State) and how he is ready to go to Sambisa Forest whenever the opportunity comes because he has got security experience. He said during the crises in Jos, a vigilante group was set up there and he was part of the group. He is a tough guy.”

Ezeanya stated that he had known Amuta since August 2018, adding that other housemates shared his sentiment about the abducted corps member’s courage. He condemned the comments on social media ridiculing Amuta for his decision to evangelise and distribute materials in Chibok.

“Nigerians always find a way of expressing themselves to the fullest, no matter the circumstance. Sometimes, you have to use diplomacy to address things like that. I am surprised that up till now, I have not heard any statement from the Nigeria Police, the Army or the Federal Government.”

When contacted on the telephone, the Pastor of Living Faith Ministries in Borno State, Victor Samaila, declined to speak on the incident.