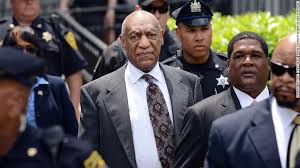 Constand, a former Temple University employee, lost consciousness after Cosby gave her three blue pills and a sip of wine. She came to with Cosby digitally penetrating and groping her and forcing her hand on his penis.

The jurors spent nearly 15 hours over two days deciding the verdict after being charged Monday morning.

Victims of Cosby sitting in the Norristown, PA, and courtroom shrieked and cried in delight after the first verdict was announced. The comic sat forward on the edge of his chair, showing little emotion. But when Montgomery County District Attorney Kevin Steele began addressing bail, Cosby became animated.

Judge Steven O’Neill said Cosby could remain free on bail until sentencing. Steele pleaded for him to be jailed immediately, saying he was a flight risk and owned a plane. Cosby, who had been silent throughout the trial, shouted back.

“He doesn’t have a plane, you asshole,” said Cosby, referring to himself in the third person, his voice shaking. “He doesn’t know.”

O’Neill didn’t announce a date for sentencing, but state law requires it within 100 days of a conviction. Cosby, 80, could face up to 30 years in prison – 10 years for each count – a stiff fall from grace for the pioneering actor who’s amassed tens of millions of dollars over his career and became known as “America’s Dad” renowned for his wholesomeness and wisdom after starring in the landmark The Cosby Show.

“We are very disappointed by the verdict,” Cosby’s lead Defense Attorney Tom Mesereau said outside the courtroom after the verdict was read. “We don’t think Mr. Cosby is guilty of anything, and the fight is not over.” Asked by a reporter whether he plans to appeal, he said, “Yes, yes, very strongly.”

Cosby originally had escaped guilt during a trial last year after the jury was deadlocked over five days of deliberations. His attorneys also had pursued more than a dozen court hearings and numerous attempts to get the charges dropped since he was first charged on December 30, 2015.

Despite more than 50 women coming forward with sexual assault claims against Cosby, the alleged assault of Constand has been the only one contested in court. With the statute of limitations having expired for the rest of them, the fate of Cosby rested solely in the hands of the Montgomery County District Attorney’s Office.

Its prosecution was buoyed this time around by O’Neill allowing five other accusers to testify. Last year, just one other accuser could take the stand. Cosby’s lawyers had motioned to prevent the other accusers from testifying, fearing a #MeToo atmosphere would take over the courtroom. The attempt was to no avail.

Janice Dickinson, Heidi Thomas, Janice Baker-Kinney, Lise-Lotte Lublin and Chelan Lasha provided testimony that they were drugged by Cosby with wine or pills, matching Constand’s story. All of the women except for Lublin said they were sexually assaulted by him. The prosecution called it Cosby’s “signature plan.” At times, they rebuked strong questioning from the defense, such as when attorney Kathleen Bliss asked Thomas whether she was testifying to help Constand.

“I want to see a serial rapist convicted,” Thomas said.

Unlike last year, when Cosby’s previous attorneys attempted to cast the Cosby-Constand relationship as romantic, they categorized her this time around as a gold-digger, pointing to the $3.4 million settlement she received from Cosby. The strategy was apparent from Mesereau’s opening statement, when he said, “Does it sound like Mr. Cosby betrayed her or that she betrayed him and tried to milk him for over $3 million?”

Barbara Ashcroft, a Temple University law professor and former prosecutor in the Montgomery County District Attorney’s Office, said the defense may have gone too strong in this direction. The idea may have backfired because it set up a burden the defense needed to meet – and didn’t.

“When you put out that kind of defense the jurors are looking for that throughout the trial,” said Ashcroft, who also advises the Department of the Navy on sexual assault cases. “If that’s your narrative, you better come through.”

The prosecution addressed the gold-digger accusations head on. District Attorney Kevin Steele pre-empted the defense by mentioning the settlement amount in his opening statement. Assistant district attorney Kristen Feden began her questioning of Constand by asking her why she was in the courtroom.