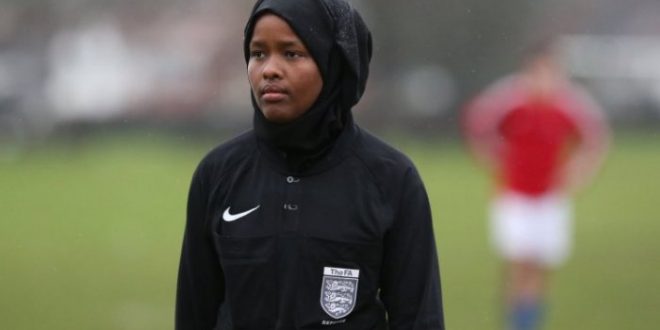 A young woman has made history by becoming the first female Muslim hijab wearing referee in the UK.

Jawahir Roble, 24, known as JJ, who moved from Somalia to the UK with her family as a child, is currently in her third full season as a Football Association-registered official.

After starting her IT studies at university, JJ made the decision to dedicate herself to becoming a professional referee, after being asked to referee in a local girls’ league in North West London as a teenager.

In 2004, JJ Roble’s family fled Somalia and ended up living in the shadow of Wembley Stadium.

The Britain’s first female Muslim referee has revealed how she overcame troll abuse to make history.

Her aim is to inspire more women into playing football and to get the England ladies to the top of their game.

JJ has had to put up with footballers asking when the “proper ref” was turning up, and some people have suggested she had turned her back on her religion.

It makes calling a split-second decision on a penalty shout look a doddle.

But JJ, who stands just 5ft 4ins, explains she is commanding respect on the pitch after her second full season and as FA-registered official.

“Of course football is not my culture, no. But I am here to break stereotypes. Girls can play football; girls can do whatever they want.

“Who said girls can’t be a referee and a Muslim? Who? “My religion is part of me and I love it.

“When I first turned up to the match you could hear some boys just giggling, ‘no way she is the ref?! No!’

“(But) they can see that I am the ref because I am wearing my full kit.

“Now, I don’t know if word of mouth is spreading, I don’t even get that anymore, they’re like, and ‘do we have linos?’

“They ask me other appropriate questions, instead of, ‘are you the ref?’

“I don’t get any grief because of my gender. There was one time a guy came up to me and said, ‘I really like female referees, they’re good’.

“I will take that, that’s very nice, but no one has ever said, ‘get in the kitchen, you don’t belong here’. I’ve not heard that yet and I don’t want to hear it.”

JJ got into refereeing almost by chance, helping out London’s Capital Girls League when they were short after studying for her coaching badges.

Previous Amosun Eulogises Ebenezer Obey At 77
Next Bata Back In Nigeria, Builds $1m Plant In Abuja 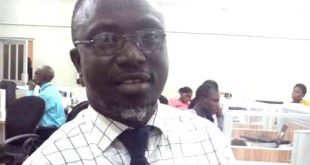 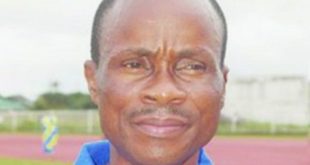 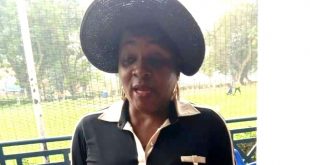