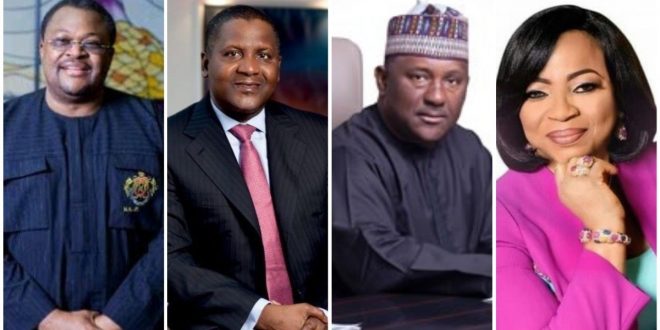 For the eighth year in a row, Nigeria’s Aliko Dangote is Africa’s richest person. In the latest Forbes’ annual list of the continent’s richest, Dangote’s estimated $10.3 billion net worth, however, is nearly $2 billion less than a year ago, primarily due to a roughly 20% drop in the stock price of Dangote Cement, his most valuable asset.

With more detailed information provided by Dr. Mike Adenuga about his assets, the Nigerian-born telecoms mogul has now been ranked the continent’s second richest with an estimated net worth of $9.2 billion.

Nigerian cement mogul AbdulSamad Rabiu, who runs and owns the BUA Group, returns to the list for the first time since 2015.

The Kano-born magnate merged his Kalambaina Cement firm into publicly traded Cement Company of Northern Nigeria, which he controlled, in late 2018.

In the same vein, Nigeria’s richest woman, Folorunsho Alakija, whose net worth dropped to $1.1 billion from $1.3 billion, was ranked 19th and the fourth Nigerian in the latest Forbes ranking of Africa’s richest. Alakija owns a stake in one of the most productive oil fields in Nigeria, currently operated by Chevron. Her net worth dropped due to a decline in the value of the oil field, in part because its production has leveled off.

According to the influential magazine, Forbes, buffeted by plunging stock prices and weaker currencies, the number of African billionaires shrunk to just 20, down from 23 a year ago. Four people fell off Forbes’ annual list since last year while one returned to the ranks after a four-year absence. All but four members of the list have smaller fortunes than a year ago.

In a per country ranking, Egypt and South Africa are tied with five billionaires each, followed by Nigeria with four and Morocco with two. Forbes found one billionaire each from Algeria, Angola, Tanzania and Zimbabwe.

Altogether the 20 African tycoons are worth $68.7 billion, down from $75.4 billion for last year’s list. However, the average net worth for each list member this year has climbed to $3.4 billion from $3.3 billion in early 2018.

Publisher and Editor in Chief - Magazine and Online Tel: 08038525526 - 08023339764 - 08055657329 Email: startrendinter@gmail.com
Previous How Tinubu’s National Assembly Office Burgled
Next How MC Oluomo Was Stabbed With A Poisoned Knife At Lagos APC Campaign Rally