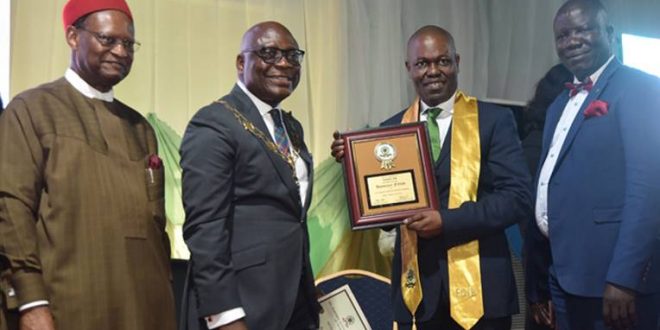 Bankers Must Work Together To Support Economic Growth – Ecobank Chief

The Chief Executive Officer of Ecobank Transnational Incorporated (ETI), Ade Ayeyemi says it is important for Nigerian bankers to work together to ensure that the banking industry does its bit to support the development of the Nigeria economy.

According to a release e-signed and made available to StarTrend Int’l magazine & www.startrendinternational.com by Ayomide Oluwaseun of PR Red, Mr. Ayeyemi who was responding to media questions during the conferment of Honorary Fellow on him and some astute bankers by the Chartered Institute of Bankers of Nigeria (CIBN) in Lagos recently, noted that there is also need to build capacity of people within the banking industry to be able to understand what needs to be done and to support the Nigerian government in doing the right things.

Ade Ayeyemi noted that the Nigeria economy is not growing as much as it should and banks need to be able to participate by lending to the economy to grow and also to support the governor of the Central Bank of Nigeria to succeed in driving monetary policies for economic growth.

Ayeyemi further stated that the prospects and opportunity for the Nigerian economy to get to the peak is very bright, saying, “The country has the large population, they have large market, we have people that are intelligent, we need to be able to convert those opportunities to real outcomes and that is why I said, the banking industry is important, but the people who are borrowing need to be diligent in paying back, not paying back is not a good business.

Publisher and Editor in Chief - Magazine and Online Tel: 08038525526 - 08023339764 - 08055657329 Email: startrendinter@gmail.com
Previous Integrity Is Your Most Valuable Collateral, Osinbajo Tells Young Nigerian Graduates
Next Concerted Action By Countries Around World Is Crucial Towards Tackling Terrorism In Sahel Region – Osinbajo