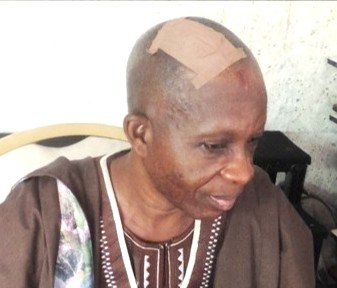 IBADAN – After surviving what he described as an assassination attempt which took place on Wednesday, October 28, 2020, the General President of Ibadan Joint Traders Association (IJTA) Alhaji Dauda Abiodun Oladepo narrated his close to death experience from the incidence.

It would be recalled that the leadership tussle rocking traders association’s/unions in Oyo State assumed a new trend when some hoodlums stormed the secretariat of Ibadan Joint Traders Association (IJTA) at Mapo, Ibadan on Wednesday, October 28, 2020, and unleashed terror on the association’s President, with an attempt to kidnap him.

While recalling his ordeal to newsmen after leaving the hospital; Alhaji Oladepo stated that it was the grace of God that his health was quickly restored back after being macheted on the head by the assailants allegedly sent after him from his enemies.

In his words; “We were holding our quarterly meeting which normally comes up every fourth night at our secretariat, when the secretary of the association, Kamilu Ariyo rose up and started accusing everyone, putting allegation against some members and pointed at me that I was the one who sued Olubadan of Ibadanland and meanwhile I never sue Olubadan because his father and Kabiyesi are very good to me”.

According to him, the person who sued the Olubadan is Alhaji YK Abass, who is found of calling himself the Babaloja of Oyo State.

He continued, “We Marketers know our leader, Alhaji YK Abass is not a marketer so there is no way he can be our Babaloja, let him tell the world where his market is, he is a food vendor and Grand-pepper millers cannot be the one to install Babaloja for us, we have an association and we know ourselves. Also the right to choose Babaloja belongs to those who are trading in the market and the title belongs to us, that was the reason why we went to court”.

“Kamilu Ariyo was the one that signaled to the hoodlums and pointed at me as they entered into the premises where we were having our meeting. They said I should be brought to the palace of Olubadan, and the thugs who were armed with guns and cutlasses bounced on me with machete, I was mercilessly beaten blue-black till my clothes got torn, it was some of my group members who intervene, rescued me from their hands, took me to the hospital,” he said.

Oladepo also added that “One of the thugs forcefully took the association bus key from one of our members and drove it to Olubadan Palace which shows that the thugs were sent from the palace to kill me.

“I don’t know my offense to warrant being killed, and there was no Police to report the matter to, I only brief my lawyer for appropriate actions”.

Oladepo added that the Governor of the State, Engr. Seyi Makinde is so dear to the people of the state because he had been helping them in the market ever before he became the governor by giving their children scholarships and supporting their businesses with grants and that was the reason why they mobilized and voted for the Governor during the last election which took place in the state.

According to him, he is sure the Governor is not pleased with the tragic situation and promised to formally brief him on the deadly incident.
Oladepo also added that Kabiyesi has made it clear to him in a letter he wrote to him which he (Oladepo) also fill sometimes ago that he (Kabiyesi) is not interested in the selection of Babaloja among the traders in the market, but the opponent are actually using Kabiyesi’s name to oppress them.

He also alleged that, one High Chief in Ibadan, Chief Amidu Ajibade have once incited some of his people to go to the media and announce that he has been removed from his position. But according to him, the association have their guiding principle and constitution which was duly registered with the Corporate Affairs Commission (CAC) which disenable anyone to instructs them anyhow.

The IJTA President said he have great regards and respect for Kabiyesi, the Olubadan of Ibadan and “they will not do anything to tarnish his name or belittle his throne”.

Speaking in the same vein, The Babaloja General of Oyo State, Alhaji Ismaila Aderemi Jimoh who also described the incident as a condemnable act which is totally unacceptable to the vast trader’s populace.

He explained that “Alhaji Oladepo cannot take the matter to court singlehandedly; it was the association that is suing the person who is trying to usurp a position that is entitled to them and not Kabiyesi that is being taken to court”.

In his words, “Such incident do not portray the traders in a good light, sending assassins against each other.”

He added that he knew Kabiyesi can never be party to such a dastardly act, saying, “Kabiyesi is a father to all of us and every party involved”.

According to a source from Olubadan who denied the involvement of the royal father in the act; he said some traders rushed to the palace on Wednesday, October 28, 2020, to report the president of IJTA, Alhaji Dauda Oladepo, who they alleged led some thugs to their shops and ordered attack on them.