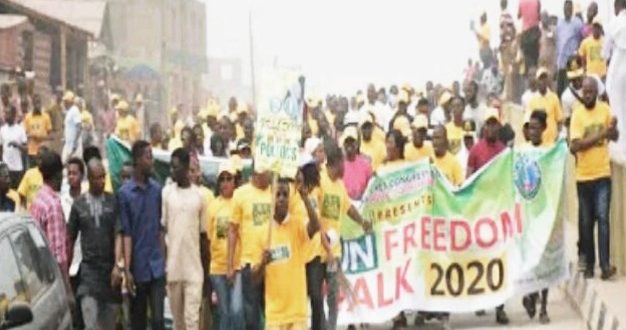 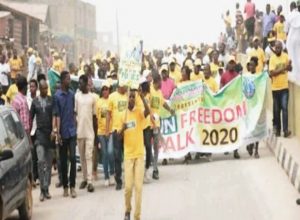 ABEOKUTA: The Youth wing of the All Progressives Congress (APC),  Ogun State on Tuesday February 11 led other youths in the state on Freedom Walk in Abeokuta in remembrance of one year anniversary of attack on President Muhammadu Buhari and Governor Dapo Abiodun during the presidential campaign rally in Ogun state on February 11, 2019.

After the walk, the vibrant youths alongside other government officials converged on the June 12 Cultural Center when special programme was organised to sensitized the youths on political tolerance.

The Speaker, Ogun State House of Assembly, Rt. Hon. Oluomo Olakunle and Special Advisers to Governor were among the discussants at the event.

Speaking on the essence of the walk, the state Coordinator, Ogun APC Youths League, Comrade Olamide Lawal hinted that the ceremony was to celebrate the liberation from political oppression and escape from several attacks, oppression and intimidation during electioneering campaign on February 11th, 2019.

Comrade Lawal, who also is the Special Adviser to Governor on Youths said: “Today is the day that we have decided to glorify God.

It could be recalled that last February 11, 2019, we faced several intimidation, attacks oppression during the campaign of governor Abiodun.

“The hallmark of it was when President Muhammadu Buhari and others were stoned at MKO Abiola stadium, Abeokuta by thugs. If you google the news, what you generate did not beautify the state. To God be the glory, we are here today in victory.

“Today, we are celebrating where they thought we will not be able to reach, but God put us there. That is the reason for celebration.”

Lawal therefore, advised the youths to be tolerant and not subject themselves to be political thugs, stressing the need for peaceful coexistence.

Publisher and Editor in Chief - Magazine and Online Tel: 08038525526 - 08023339764 - 08055657329 Email: startrendinter@gmail.com
Previous Abiodun Remembers Rally Where PMB, VP Others Were Pelted, As Ogun Exco Approves Amotekun Bill
Next I Am Not A Cultist, I Was Charmed By Unknown Cultists For Initiation, SU President Claims