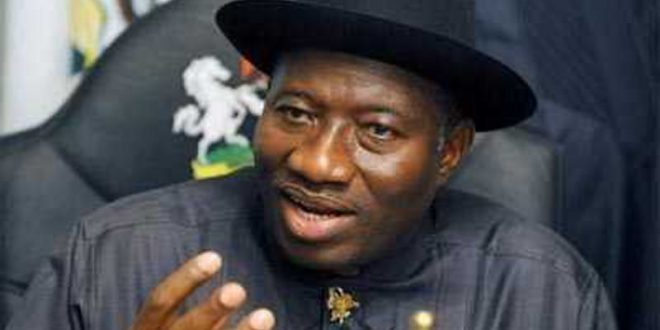 Former Nigerian president, Dr Goodluck Jonathan, has said that without unity in the ranks of Peoples Democratic Party (PDP) in Bayelsa state, the opposition All Progressives Congress (APC) may find their way into the governance of the state come November 16, 2019.

The Special Adviser to Governor Seriake Dickson on Media Relations, Mr Fidelis Soriwei, quoted the former president as saying this during the PDP Elders Advisory Council meeting held at the Bayelsa Government House in Yenagoa on Tuesday, August 6, 2019.

He said: “It is only our unity that can give us victory and if we are not united, they (APC) can get away with it.

“For example, it took the unity of the people of Rivers state including women who were resolute against soldiers to get the PDP victory in the state. If that had not happened, the opposition would have taken it.

“Though, the opposition All Progressive Congress (APC), in Bayelsa State lacks the political presence at the ward, local government and state levels to win the November 16, 2019, governorship election, but PDP must be more united to retain power in the state.

“I need to plead with all the aspirants and all political leaders that there should be no mudslinging. We must free the space and eschew rancour because finally one person will become the candidate of the party and for that one person to win the election, all aspirants must work for that person.

“For us to secure this state for PDP, we need maximum unity and that is why all the 21 aspirants are important to us; we must have that maximum unity and must not create any form of division or discrimination.

“At the end of the day one person will emerge and all of us will work for whoever emerges as candidate of the party,” he said.

Earlier, Governor Dickson had stressed the need for members of the party to forge a united front to maintain its dominance and control of power in the state starting with the local council elections billed for August 10.

He therefore called on all members of the party, particularly the governorship aspirants to work hard for the victory of the chairmanship and councillorship candidates of the PDP in this Saturday’s election.