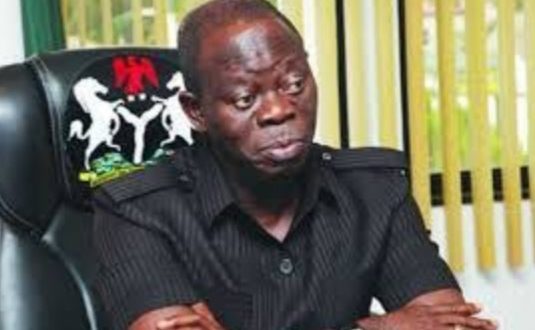 The Deputy National Chairman, All Progressives Congress (APC), North, Sen. Lawal Shuaibu, has called on the party’s National Chairman, Mr Adams Oshiomhole to resign for allegedly failing to add any value to the APC since his election.

Shuaibu, in a letter dated May 27 and addressed to Oshiomhole, accused the chairman of incompetence, high handedness and immaturity in his handling of the affairs of the party.

The letter made available to newsmen at the party’s National Secretariat on Tuesday in Abuja, quoted Shuaibu as saying that the APC had lost control of seven states under Oshiomhole.

“I am a critical stakeholder in the APC project and therefore, have a stake for which I reserve the right to write this letter to you.

“This is however, in addition to my being a legitimately elected Deputy National Chairman, North at the last National Convention, and not because i have any higher stake in APC than any other member.”

According to him, Oshiomhole lacked the capacity and necessary composure to lead the party.

Shuaibu noted that the respect and sympathy the APC used to enjoy among its members and sympathisers before Oshiomhole emerged as its Chairman had been eroded.

“It is my honest opinion that your ability to ensure this party flourishes is deficient as you lack the necessary composure and you also don’t possess the capabilities and requisite experience to run a political party.

“The respect APC was commanding among its members and sympathisers have been completely eroded, while the goodwill has equally evaporated,” he stated.

This, he added, was especially so because of Oshiomhole’s attitude of threats to party members, including governors, senators, ministers and other government officials whose functions did not fall within his jurisdiction.

Shuaibu stressed that the party and government were supposed to cooperate and collaborate to ensure that government programmes were implemented in line with the party’s manifesto.

He frowned at the attitude of shouting and giving marching instructions to government officials on television and on the pages of newspapers by the APC national chairman.

Shuaibu, however, said he was not criticising Oshiomhole’s conduct and style of leadership because he wanted to be the party’s chairman, but because of the love he has for the party.

He added that even if he wanted to be the APC national chairman, he could not be as long as President Muhammadu Buhari is in office, having come from the same North West geo-political zone.

“In advanced democracies, people who failed to add value or build over and above what they met on assumption of duty, show some civilised examples; they honourably bow out.

“In that connection therefore, I want to advise you to take the path of honour, to step aside.

“I have nothing personal, except that I love this party and cannot keep quiet seeing it being brutally murdered,” Shuaibu posited.

Shuaibu argued that Oshiomhole’s resignation was critical to allow the party to embark on reconstruction and rehabilitation in states where it was weakened by the effect and manner of the last primary elections,

He said, APC is on the path of extinction in some states following the conduct of its last primaries.

According to him, this included the loss of a sitting APC government in Zamfara, where he alleged Oshiomhole directly created the problem that led to the complete loss of APC’s electoral fortunes in the state.

“All these are uncontestable facts; you cannot exonerate yourself from blame on what happened to APC in Zamfara, thereby destroying the hopes and aspirations of 534,541 APC members and supporters.

“Apart from the President, more than 60 per cent of members including those that contested elections under the APC in 2019 are not happy with the process as it left a lot to be desired.

“We have court cases in every state, by far much more than it was in 2015 and I wonder how much money the party is likely to spend on litigations arising from mistakes of the national chairman,” he said.

Shuaibu was of the opinion that the strength of every political party was on the number of states it won during elections, adding that the APC had 23 states in 2015, but lost seven after the 2019 elections.