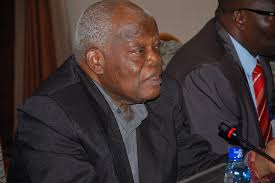 Emeritus Professor of History, Prof. Anthony Asiwaju has been described as an accomplished academics and administrator par excellence whose works have contributed immensely to the upliftment of culture and development of tertiary education in Nigeria and the world.
Ogun State Governor, Senator Ibikunle Amosun made this submission when he joined other dignitaries and scholars at the laucnch of Professor Asiwaju’s book titled ‘’Africa Border Boom Town Imeko Since 1780’’, held at Afe Babalola Auditorium of the University of Lagos.
Governor Amosun, represented by his Deputy, Chief (Mrs) Yetunde Onanuga described the author as an astute Academic and one of the pioneer historians whose scholarly contributions to the development of culture and tertiary education in Nigeria remained outstanding.
Amosun said the 342-page book was a detailed case study of urbanization in typical African frontiers, ‘’essentially a Yoruba narrative, put together to satisfy the legitimate yearning of people for their own local history’’.
He noted that it was a cross-border and global comparison that can be explored to raise the level of interpretation and overall meaning of the book, adding that it was aimed at making a distinct input to borderlands literature and the study of African border towns. He pointed out that the book would be useful for resolving international boundaries dispute, for scholars of history and tourists alike.
Amongst the dignitaries at the event were, the vice President, Prof. Yemi Osinbajo represented by Senator Femi Ojodu, Prof. Biyi Afonja, Prof. Ibrahim Gambari, Chief Olatunde Abudu and Yewa Council of Obas led by the Olu and Paramount Ruler of Yewa land, Oba Kehinde Olugbenle.