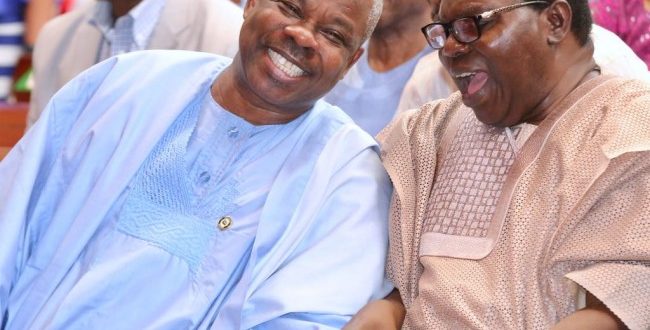 The Juju music icon, Evangelist Ebenezer Obey-Fabiyi has been described as a legend, whose music has positively impacted many lives across the globe.

Represented by the State Commissioner for Local Government and Chieftaincy Affairs, Chief Jide Ojuko, Governor Amosun pointed out that Chief Obey-Fabiyi was a gift to the State, as his music has earned the State more popularity and good image across the world, praying that God would continue to grant him more prosperous years in good health.

Also speaking, the Olu of Ilaro & Paramount Ruler of Yewaland, Oba Kehinde Olugbenle, while commissioning an office building donated to the Nigeria Security and Civil Defence Corps by the celebrant, enjoined indigenes of the area to emulate the music legend by contributing their quotas to the growth and development of Idogoland and its environs.

In his remark, Chief Ebenezer Obey-Fabiyi said, “the journey of 77 years could only be made possible by God. I will continue to thank God for everything He has done for me in life.

‘‘God has been so good to me in the last 77 years. He sent me to this world to be a musician. He gave me the gift and the talent of music and fame to make me known and accepted throughout the world.

“I also thank my parents through whom I came to this world. They were very special because they really tried for me. I also thank the media through whom I gained my popularity. The media really contributed in great measure to my success “.

Highlight of the event was the naming of Ilaro/Idogo road after the musical legend by the authority of Yewa South Local Government, with inscription “Evang. (Prof.) Ebenezer Obey Fabiyi Road”.