Breaking News
Home / HEADLINE / Amosun, Daniel, Abiodun Feud Rages On As They Snubbed Each Other At Ikenne Event 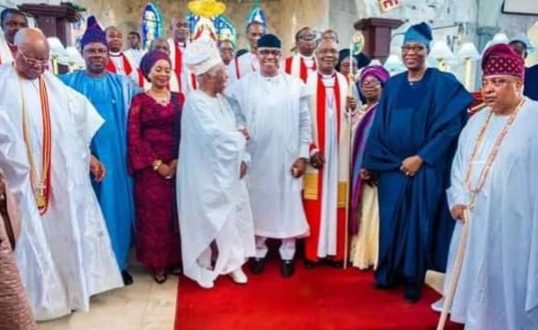 Amosun, Abiodun, Daniel, others at the event

Amosun, Daniel, Abiodun Feud Rages On As They Snubbed Each Other At Ikenne Event

Idowu Hamed March 1, 2020 HEADLINE, NEWS, SO-CHEERS Comments Off on Amosun, Daniel, Abiodun Feud Rages On As They Snubbed Each Other At Ikenne Event 360 Views

IKENNE-REMO: The lingering feud generated by the 2019 governorship election in Ogun State seems to be aggravating with no end in sight as the major gladiators still holding grudges against each other.

According to observers of the scene, the ongoing feud was noticed on Saturday, February 29, 2020 as former Governor Ibikunle Amosun of Ogun State met with his successor, Prince Dapo Abiodun and his predecessor, Otunba Gbenga Daniel, at an event in Ogun, but the trio countenance shows that the fight still rages on.

The event was the 95th birthday of Prince Babatunde Onafowokan, the CEO of Ladgroup, which took place at the Anglican Church, Ikenne-Remo, Ogun state.

It will be recalled that relationship of the thrio that used to be friends from time immemorial became sour in 2007 when they contested against each other.

In 2011, Amosun succeeded in uprooting Daniel of the PDP by defeating his anointed candidate, Gboyega Isiaka. That was when Daniel went into political hibernation.

Then, Abiodun and Amosun were still friends as he used to get contracts from Amosun and even contested under him as Senator, but lost to Kashamu.

In 2019, Abiodun ran to Daniel to help him to become governor of Ogun because of the stiff opposition from Amosun.

Amosun supported Adekunle Akinlade, who he said was robbed of the APC primary election by the Adams Oshiomhole-led National Working Committee (NWC).

Today, Abiodun is the governor and Gbenga Daniel is his closest friend.

The irony of the whole issue is that the trio ended up being governors of Ogun, which serious-minded political pundits viewed as mission accomplished by these “Omo Iya Meta” who probably came to Ogun State from their earlier Lagos based to achieved a lifetime ambition.

Publisher and Editor in Chief - Magazine and Online Tel: 08038525526 - 08023339764 - 08055657329 Email: startrendinter@gmail.com
Previous Govt. Will Continue To Give Adequate Support To CDC, Says LG Boss
Next TB Joshua Says, Scourge Of Coronavirus Would Soon Be Over, Assures Nigerians A Shower Of Rain That Will Wipe Away Fear Of The Unknown