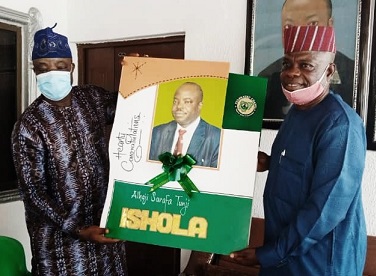 On the invitation of the Ambassador-Designate, the group of publishers in the Federated Chapel of the NUJ held fruitful deliberations with the Elder Statesman.

The Baba Adini of Yorubaland, Edo & Delta who could not hide his irritation to a visit by some individuals claiming to be leaders of the Chapel to his residence during the Eid-el-Kabir festival expressed displeasure when he was presented with facts that the group was not recognised by the National, Zonal and State authorities of the NUJ.

Addressing the delegation of the authentic Federated Chapel Executives, accompanied by the Chairman, Ogun State NUJ Caretaker Committee, Comrade Omolola Adeyinka and another member of the committee

Comrade Anthony Gandonu, Alhaji Sarafa Ishola said he was misled to identified with the said group, but had to reach out to the recognized leaders when his attention was drawn to the deceit.

Alhaji Ishola however expressed concern that the media which ought to be the role model for society was enmeshed in crisis and washing their dirty linens in the public.

While urging members of the fourth estate of the realm in Ogun State to embrace peace and tranquility for stability of the union, the former Minister called on the leadership of the Union to be proactive in finding a lasting solution to the crisis, adding that there was no conflict without the opportunities for peaceful resolution.

Ishola whose appointment as Ambassador-Designate was announced by President Muhammadu Buhari, identified that greed and impatience as major causes of division among groups of people.

The former Secretary to the Ogun State Government said he was ready to mediate between the warring factions as a Patron for the Union and urged members of the NUJ in the state to set aside their differences for the progress of the Union.

His words, “There is no conflict without peaceful resolution. There’s no alternative to peace. Without peace there cannot be progress. I have always been an apostle of peace.

“I am ready for whatever we can do to make peace. Don’t be too sure when you have a case in court, nobody could say who will win or lose. What I’m saying is that crisis and conflicts are normal in every human endeavors.”
“We should look for peace in Ogun NUJ. Go back to the bottom and allow fairness, equity on both sides. From today, start thinking of how to make peace terms.”

He therefore congratulated the new and authentic leadership of the Federated Chapel led by Comrade AbuSatar Idowu Hamed, urging them to always work towards welfare of their members.

Earlier, the Chairman, Ogun NUJ Federated Chapel, Comrade AbuSatar Idowu Hamed had congratulated Alhaji Sarafa Tunji Ishola on his new appointment as Ambassador-Designate by President Muhammadu Buhari.
AbuSatar described Ishola’s appointment as a result of his loyalty and track record as a seasoned politician and administrator.

He expressed confidence that, the Ambassador-Designate would through mutual efforts strengthened the multi-dimensional Nigeria relations for the benefit of the people and in the interest of stability and security of the nation.

The Chairman of the Federated Chapel of Ogun NUJ however called on members of the public not to have anything to do with anybody or a group of people who are not from Ogun NUJ, saying, “our conduct as fourth estate of the realm must therefore be professional and above reproach at all times.”

He noted that there was no division in the Ogun State Federated Chapel, rather the chapel was trying to flush out those who used the body to scam unsuspecting members of the public through blackmail and threats of writing negative stories against them.

AbuSatar however advised members of the public to report any act of impersonation from anyone or group of people not certified by the National, Zonal and state councils of NUJ to the security agencies and Ogun State NUJ, at the Union’s Secretariat, Iwe Iroyin, Abeokuta.

Publisher and Editor in Chief - Magazine and Online Tel: 08038525526 - 08023339764 - 08055657329 Email: startrendinter@gmail.com
Previous Adelusi-Adeluyi @ 80: The Giver’s Hand Is On Top
Next Covid-19 Vaccine: Pfizer Says Supply To Nigeria Is Priority In Africa As Osinbajo Says, Health & Safety Of Nigerians Is Buhari Administration’s Priority