Breaking News
Home / HEADLINE / Allocation Or No Allocation, I Will Pay Workers Before End Of Every Month, Dapo Abiodun 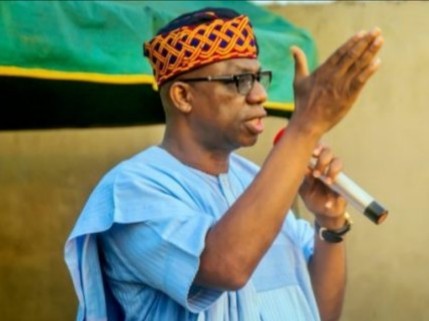 Allocation Or No Allocation, I Will Pay Workers Before End Of Every Month, Dapo Abiodun

Idowu Hamed June 3, 2019 HEADLINE, NEWS Comments Off on Allocation Or No Allocation, I Will Pay Workers Before End Of Every Month, Dapo Abiodun 88 Views

The Ogun State governor, Prince Dapo Abiodun on Monday June 3, 2019 pledged that his adminstration would pay workers’ salaries before the end of every month.

He stated this during a meeting with the State’s workforce at the Arcade Ground, Oke-Mosan, Abeokuta, the State capital.

The Governor who reiterated his readiness to be workers friendly said that the Civil Servants are paramount in his adminstration.

”The civil servants are central to our vision because the topmost of our vision is good governance and we can’t achieve it without prompt payment of salaries, and I’m assuring that the payment of workers’ salaries will take effect before the end of the month.

”You can’t talk about qualitative service and creation of enabling environment when you are owing salaries, Investors will not even come if we are owing salaries; hence, your salaries will be paid as at when due.

”I have made up my mind to pay your salaries before the end of the month whether allocation from Abuja comes or not,” Prince Abiodun posited.

The Governor also charged the Civil Servants to be diligent in the discharge of their duties, with a promise to expose them to continuous training in order to ensure efficiency and effective performance, describing them as the engine room of his administration.

He said, “Ogun will not be a “Banana Republic” because we won’t tolerate indiscipline. During my first working day in office, I have met with the Security chiefs of the State to discuss extensively the security matters. It will interest you to know that such meeting has not occurred in the last two years”

”In the cause of our campaign, we observed that the major disconnect between the government and the governed is the poor rural and township roads infrastructure.

“Therefore, we are resuscitating the Public Works Department to allow us use the in-house men to do the construction of roads, and we shall train them to meet the global standard.

”The PWD will have six yards across the state, i.e Abeokuta, iIo, Sagamu, Ijebu-Ode, Ota and Ilaro to ensure their wide coverage and optimum performance, Other major roads like Lagos-Sagamu, Lagos-Ijebu Ode and Agbara-Atan will be constructed using public-private partnership arrangement,” he promised.

Abiodun emphasised his plan to have an education master plan to address the current challenges in the education sector, build a befitting Primary Health Centre in each of the 236 wards and one Specialist Hospital in each of the three Senatorial Districts of the State.

He assured that his administration would harness the agricultural potentials of the State predicting that the State would soon be feeding other States with its agricultural produce.

The governor said; ‘I want to called on the civil servants to be patient with me and supportive so as to achieve my programmes”
He promised to always engage the workers on a regular basis.