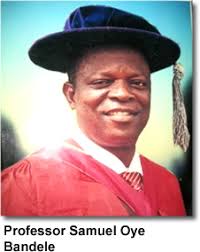 The Vice-Chancellor, Bowen University, Iwo, Osun State, Prof. Joshua Ogunwole has cried out to the world on the alleged drugs amongst students of the institution.
In a statement signed and made available to the media by the VC, it read in parts; ‘‘To Esteemed Parents of Bowen University this first feedback is coming to you because of the need to offer clarification on the action which has taken you by huge surprise.
‘‘I offer my very sincere apology for this – especially because as a parent and a salary earner, I understand what it means when strong emotions intermix with additional financial burden especially at this economically hard time.
‘‘The Bowen University approved a search into identified rooms after a tip-off and 43 students were approached to submit themselves for dope test. 37 agreed while 6 refused (I will come back to the refusal). Of the 37 that were examined, 24 tested positive to some drug metabolites while some were found to have been in possession of prohibited substances.
‘‘Imagine what a statistician will do when interpreting that number against our population. Those who refused to submit themselves for a dope test were in fact on our list of the most notorious, but these ones immediately violated our laws and were charged for insubordination. I will not be a VC that will graduate students who will refuse to obey constituted authorities.
‘‘To the reason for the action of the University, may I start with what I have observed within just few months of this administration. From the lens of student discipline, I have observed that there are lots of very young, timid, but highly intelligent students (boys and girls) amidst the large section of our student population.
‘‘I have also observed that there is a spread of very experienced students who are hard drug users and suppliers and who have found their way into the institution due to our porous borders in the past and who are now bent on influencing the larger section of students whose primary purpose here is to study in line with what Bowen University accepts in her extant regulations. I am a parent and heaven will hold me responsible if any of your ward fails to glorify the Almighty God in Character and Learning.
‘‘Bowen through her motto stands for Excellence and Godliness. May I ask what is excellent in drug and what is Godly in dangerous addictions? That stand (in our motto) will not change because of a few students (24 of them) who tested positive to drug metabolites of frightening degree and type and most of whom are behind the moves to cause unrest on campus.
‘‘Let me assure you that Bowen will be ridden of these ones. We cannot build any meaningful structure on drugs; the structure in a matter of time will collapse and such collapse may not be good for incalculable reasons.
‘‘Cherished Parents, please bear with us at this time as we take this opportunity to think-through the next phase of this institution painfully, collectively and prayerfully.
‘‘I pray for Gods in-exhaustive provision for you. Thanks and God bless.’’
Prof. Joshua Ogunwole however said the institution has deployed officials in places reported (Ibadan and OAU), saying, ‘‘our students will be fine in Jesus unfailing name’’.

Publisher and Editor in Chief - Magazine and Online Tel: 08038525526 - 08023339764 - 08055657329 Email: startrendinter@gmail.com
Previous Silicon Valley Execs Are Banning Their Kids From Using the Devices They Created
Next How Millions Of Naira Belonging To Customers Disappear From Sterling Bank Vault