Breaking News
Home / HEADLINE / Akinrinade Warns Buhari, Says, “We May End Up Without A Country” 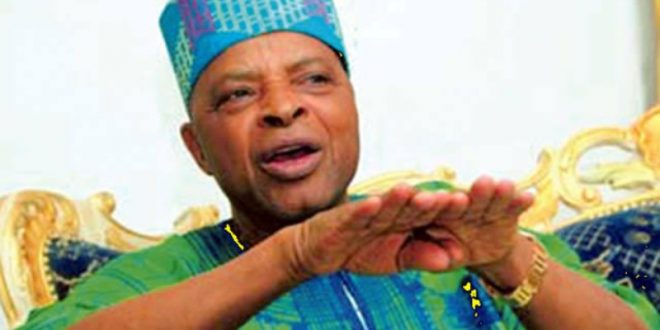 Akinrinade Warns Buhari, Says, “We May End Up Without A Country”

Idowu Hamed September 17, 2020 HEADLINE, METROLINE, NEWS Comments Off on Akinrinade Warns Buhari, Says, “We May End Up Without A Country” 47 Views

OSOGBO – The former Chief of Defence Staff, Lt. General Alani Akinrinade has called on President Muhammadu Buhari to allow the restructuring of Nigeria now otherwise there may soon be no country.

Akinrinade issued the warning in the evening of Monday, September 14, 2020, at a dinner in Osogbo, Osun State in honour of the visiting Chief of Army Staff, Lt General Tukur Buratai.

General Akinrinade who was Chief of Army Staff from October 1979 to April 1980, and then Chief of Defence Staff until 1981 during the Nigerian Second Republic said he was disturbed at the pervasive image of the president as an “ethnic bigot” asked him to address the structural problems of the country because no nation could survive two civil wars.

His words: “Please, grant me the indulgence to mention to him (Buhari) one or two matters that throw me into distress because of my association with him.

“The first is this pervasive belief that he is an ethnic bigot, an irredeemable religious fundamentalist, that he firmly subscribes and promotes the possibility of his ethnic Fulani to take over the country, the reason he does not interfere in curbing the brigandage of the Fulani herdsmen, that he has performed woefully in the fight against the terrorist Boko Haram and that he cannot rise to the occasion when it comes to reflecting the heterogeneous composition of our country when it comes to appointments to sensitive positions in his government. These are difficult matters that cannot be addressed in the abstract. The whole buck stops on his table.

“I cannot claim to have adequate information outside what the media and the ubiquitous social media chew out every second. But I know, that you and your brother Service Chiefs are doing your best within the resources our country can make available to you. Let me suggest to him that he needs to shape up, read the riot act to our people, enlist them in unswerving cooperation to participate fully in the redemption of their country. Arms and brutal force is not sufficient to defeat an insurgency.

“I am sure he is aware of the hue and cry from all corners and crannies of our country for secession as if we have not been there before. He needs to stand on his table against the motley crowd of advisers surrounding him and take a firm stand on the reorganization of our country, physically, politically, economically and socially.

“What we simply term as a reorganization in the Armed Forces is what the bloody civilians call RESTRUCTURING. It is long overdue and over flogged, as if it is such an impossibility, an attempt at which, will balkanize the country. As a matter of fact, it is what is required to move our country out of the doldrums into modernity. He cannot afford to pass it on. We may end up without a country, as no country has been known to survive two civil wars.”

Gen. Akinrinade (rtd) stated further: “He can take better counsel in the appointments to the sensitive parts of his government. There are capable and loyal men and women from every village in the country.

“We are regaled every day with blood-chilling stories of killings and pillaging of villages, sometimes towns in the North and Central parts of Nigeria, and of recent talks of impending massacres and intensification of kidnapping coming our way in the Southern States and the main protagonists of the disturbance is the Fulani herdsmen.

“Sometimes we are told that they are Fulani mercenaries from outside Nigeria being sponsored by our Nigerian brothers. The situation is so dire, that in collaboration with unexpected bad weather this year, a famine is imminent. We hear we are already borrowing grains from the ECOWAS countries, the immediate result of farmers being forced to abandon their farms.

“I suggest to him to read the riot act to the Fulani herdsmen, that it is not acceptable for any foreigner by whatever name called to enter our country illegally and molest our people. They are not welcome. We should not, by mistake of omission or commission allow our people to degenerate to self-help. It is a sure road to anarchy and perdition, which will not go away.”

The former Chief of Defence Staff thanked General Buratai for approving the construction of a bridge over River Osun in Kuta, Ayedire Local Government Area of the state by army engineers.

He also thanked him “profusely for sorting out the pension scheme for the Army,” saying Buratai had “stopped the culture of (pensioners) queuing quarterly in the Army barracks for recognition and documentation parade.”