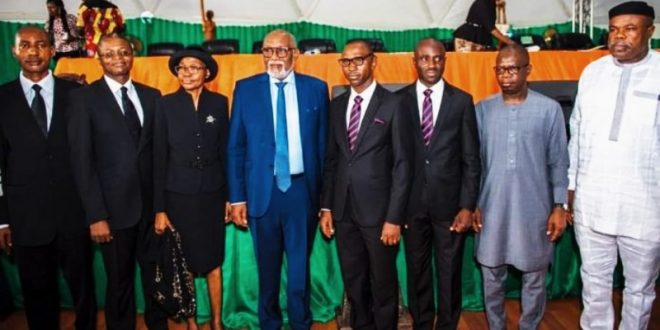 AKURE: The place of judiciary as the third and very important branch of government has become indisputable. Globally, vibrant judiciary is recognised as the last hope of the common man.

Without a well-organised and an independent judiciary, a nation cannot be said to be practicing a democratic government whose major preoccupation is to promote and make justice and equity its hallmark.

As a cornerstone of every democratic government, judiciary serves as the solid foundtion on which the structure of civil liberty is built.

It is in the light of this that Governor Oluwarotimi Akeredolu of Ondo State recently swore-in four new judges of the State High Court to facilitate quick delivery of justice in the state.

The governor, while swearing in the four judges, urged them to justify the confidence reposed in them by always living above board and suspicion.

The statutory number of judicial officers in Ondo State, by virtue of Section 3 of the High Court Law, Cap 62, Laws of Ondo State of Nigeria, 2006, is 24.

In spite of the shortfall in the number of judges statutorily required in Ondo State, the recent step taken by Governor Akeredolu to swear-in four judges has been described as unique in the life of his administration.

Before the new judges were sworn-in, the Ondo State Judicial Commission nominated and recommended eight candidates to the National Judicial Council for consideration.

The new High Court judges, Governor Akeredolu said, represented some of the state’s best and finest materials at the Bar and from Lower Bench.

He said that Justices Gilbert Bamidele Olupitan, Olajide John Abe, Ademola Enikuomehin and Tope Adedipe, came to their new positions with wide and varying experiences for the benefit of Ondo State and her citizens.

Reeling out the qualities of a judicial officer, Akeredolu told the new judges to make sobriety, continence and general disposition towards rectitude their hallmark.

The governor added that Ondo State would not accept anything short of their best, saying, “It is in this light that we continue to insist on having the best occupy the Bench.”

Akeredolu, while decrying the recent challenges thrown up by the incursion of strange elements into the judiciary, stressed that a judge must be a shining light to the society because his conduct and behaviour reflect the public image of the judiciary.

He said: “The average citizen must be able to perceive the intervention of the Bench as credible, regardless of the outcome. Litigants must leave believing that justice has been done.

“The future of the judiciary and indeed the nation depends, to a large extent, on how our judges perform their duties, effectively.

“In effect, judges are called upon to carry out their adjudicatory duties to all and sundry in the society without fear, favour or ill will.”

As judicial officers, the governor urged the new judges to be beyond reproach.

He added that their ways might not be pleasing to the crooked, but must, however, be held in great reverence by even the most unscrupulous in the community.

As people living within the people, the governor is of the strong belief that the judges’ callings remove them from common practices because their words were always measured.

The governor said: “A judicial officer exudes an aura of invincibility. He possesses a rare, but real power of life and death.

“Any individual with these awesome powers cannot be allowed to indulge in usual observance of ordinary mortals. He is special, therefore, the exaction must be intense.”

Based on the impeccable character of the new judicial officers, the people of Ondo State will, no doubt, enjoy quality and quick delivery of justice in the state.

And consequently, a more peaceful and orderly Ondo State is possible and achievable where the fundamental rights of all the groups and people within the state, irrespective of their political and religious beliefs, would be guaranteed.

Being the guardian of the constitution, the Ondo State judiciary, which is believed to always upholding the tenets of justice, equity and fairness in all dealings, has further built the confidence of the investors who have taken interests in the strategic sectors of the economy of the Sunshine State.

The Chief Judge of Ondo State, Justice Olutoyin Akeredolu expressed confidence in the ability of the newly appointed judicial officers. She lauded the governor for his commitment to the implementation of financial autonomy of the judiciary.

As the Chief Judge congratulated the new judges on their new position, she urged them to brace up for the task ahead.