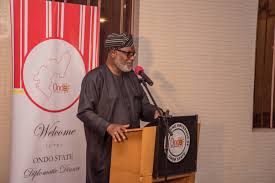 The governor of Ondo State, Rotimi Akeredolu, and human’s rights lawyer, Femi Falana, on Monday brought to the fore the need for Nigeria to be restructured in the interest of ensuring the unity and prosperity of the country.
They were also joined in the call by another constitutional lawyer and public interest litigation activist, Jiti Ogunye, who said the time to review the fiscal and political structure of Nigeria was now.
They made the call as they took their turns to deliver addresses at the June 12 anniversary held in Akure, Ondo State.
Mr. Ogunye, who delivered the first paper, titled, 24 Years of Annulment of June 12 Election, Will Nigeria Survive, Will Democracy Endure, stressed the point that the issues which edevilled Nigeria before June 13, 1999 were still haunting the country.
He noted that shortly after the annulment of the election, widely-acclaimed to be free and fair and won by the late Moshood Abiola, there had been voices calling for the restructure of Nigeria.
He said with Anthony Enahoro then leading the train, it was the focus of the June 12 struggle that the country be restructured on the platform of a sovereign national conference, which would guarantee a return to true federalism.
According to Mr. Ogunye, the call for restructuring is louder now than when it was first made 24 years ago.
“We must return to true federalism. That is where we started from and that is where we must return if we must resolve the difficult problems facing us,” he said.
“Let me refer Alhaji Lai Mohammed and President Buhari to the manifesto of the APC, the first paragraph of your manifesto says, ‘the government will initiate action to amend our constitution with a view to devolving powers to duties and responsibilities to the states and local governments I order to entrench true federalism and the federal spirit,” Mr. Falana said.
“That is page one, paragraph one of the APC manifesto. Therefore, Mr. Governor, your party, the government in Abuja cannot go back on the commitment to restructure Nigeria.”
He however said political restructuring without economic restructuring would not solve the problems either.
“Mr. Governor tell your party, Nigeria will restructure, whether they like it or not,” Mr. Falana stressed. “This business of going to Abuja every month to collect money from Niger Delta must stop.”
He urged south west governors to read Obafemi Awolowo on how he allocated over 50 per cent to social services.
Governor Akeredolu, in shedding light on the call, said restructuring did not translate into breaking the country.
He said breaking the country would nullify and bring to nought the essence of June 12 and all those who sacrificed their lives for democracy in Nigeria.
He then called for a blue print on the process of restructuring so that every Nigerian would know what the call for restructuring was about.
Mr. Akeredolu added that June 12 was not about Abiola or the Yoruba people, but about Nigeria and democratic values.