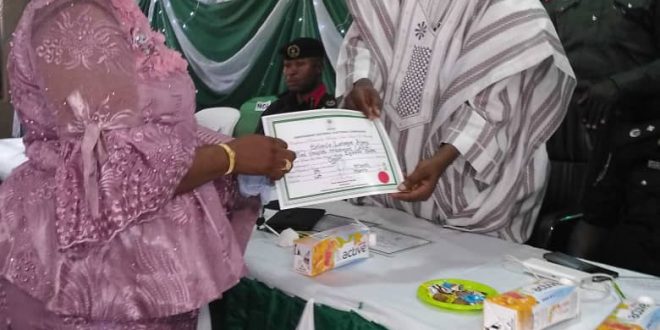 Ajayi Thanks Amosun, Others, Assures Yewa Lease Of Life

Fondly called Olufela, she said this on Thursday March 28, 2019, shortly after she received her certificate of return from the Ogun state INEC boss in Abeokuta.

She said that her journey to the OGSHA was to join her colleagues in making laws that would make impact on the people of Yewa South local government in particular and Ogun state in general, giving them a new lease of life.

Hon. (Chief) Mrs. Ajayi thanked the people of Yewa South local government area for her victory at the polls saying “I will not disappoint you all”

She also thanked Governor Ibikunle Amosun and members of the APM for their unflinching support in achieving her dream.

Her words: “Forever, I shall be grateful to Gov. Ibikunle Amosun, members of APM, my husband, Mr Femi Ajayi, children, in-laws, friends, members of CDC/CDA, Bim Table and ASPAN among a host of others for their unflinching support.

She also prayed for God to be there at the point of their needs.

Hon. Chief Mrs. Lateefat Bolanle Ajayi who contested and won as a member of the Ogun state House of Assembly on the ticket of the APM to represent Yewa South local government area constituency is happily married and blessed with children.

Tags Ajayi Thanks Amosun Assures Yewa Lease Of Life# Others#