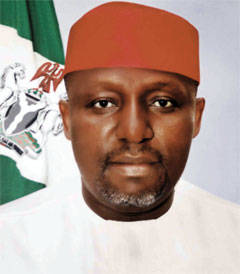 Since 2012 when he was appointed by the Pope, priests of Mbaise origin have prevented the bishop of the diocese, Bishop Peter Ebele Okpaleke, from assuming office.
Faced with the possibility of suspension from office by the Pope, dissident Mbaise priests of the Ahiara Catholic Diocese in Imo State have sought the help of Imo State governor, Mr. Rochas Okorocha, to stave off sanctions from the Vatican. Since 2012 when he was appointed by the Pope, priests of Mbaise origin have prevented the bishop of the diocese, Bishop Peter Ebele Okpaleke, from assuming office. At the initial stage of the crisis, the rebellious priests were dismissive of Mr. Okorocha’s appeal to them to accept the decision of the church.
A statement signed by Mr. Sam Onwuamedo, Mr. Okorocha’s Chief Press Secretary, said the priests visited the governor at the Government House, Owerri, to seek his intervention in the matter.
The statement, made available to SaharaReporters, disclosed that the priests begged the governor to immediately find a way a solution. It quoted the priests as saying that they were misrepresented before the Pope, who has already threatened them with suspension.
According to the statement, Mr. Okorocha told them that the crisis has caused huge reputational injuries for the state, the diocese, and the Catholic Church and Mbaise people in particular.
Five years ago, Emeritus Pope Benedict appointed Mr. Okpalaeke to the vacant seat of Bishop of Ahiara Diocese, but a section of indigenous priests and the laity refused to allow him to assume office.
The Pope later appointed Cardinal John Onaiyekan, Nigeria’s highest ranking active bishop, to administer the troubled diocese and resolve the crisis. His efforts, however, failed to deliver a resolution, as the rebellious priests and their backers refused to concede any ground. SaharaReporters learned that the Pope sent several delegations to plead with the priests and laity to respect the Vatican’s decision, but this was to no avail.
Efforts by leaders of the church in Nigeria similarly failed, as the rebellious Mbaise priests continued to insist that one of them rather than Bishop Okpalaeke must be appointed the Bishop of Ahiara Diocese.
The crisis has resulted in a huge disruption of activities in the diocese, as important events such as ordination and confirmation, exclusively reserved for bishops, have not held for five years. In a last-gasp effort to resolve the crisis, the Pope invited the rebellious priests/laity and the party backing Bishop Okpalaeke to nominate five representatives each for a private audience with him. Bishop Okpalaeke’s side complied, but the rebel priests ignored the Pope’s summon.
SaharaReporters reliably gathered the refusal of the rebel group to come up with nominees was informed by the realization that their position was untenable. The Pope and the Vatican hierarchy eventually met with priests in support of Bishop Okpalaeke along with the leaders of the church in Nigeria on June 8. At the meeting, the Pope likened the rebellious priests to the wicked tenants in the Bible, saying those refusing to accept the Papal appointment of Bishop Okpalaeke want to destroy the church. Speaking with barely disguised anger, the Pope said the Mbaise priests are being manipulated from home and abroad.
He then demanded that, for their acts of rebellion, the priests must individually write a letter of apology to him within 30 days or be suspended. The letter, he said, must include an expression of loyalty to him as well as acceptance of Bishop Okpalaeke.
Sources in the church told SaharaReporters that the Papal pronouncement has left the disloyal priests and their supporters disorientated, limiting them to two inconvenient options: comply or leave the church.
It is yet unclear how the priests want Mr. Okorocha to intervene in the face of the finality of the Pope’s pronouncement. According to a senior Lagos-based priest, the rebellious Mbaise priests must leave the church if they are not comfortable with the Pope’s decision.
“It means they have closed all windows for reconciliation with the Church. They have scandalized the church, as the Pope said. They have caused so much embarrassment to the Catholic Church and priesthood by their clearly misguided actions of disobedience. How they want a state governor to intervene in a church matter the Pope has decisively pronounced on is unclear. It is funny and shows clearly that these priests are propelled by other motives. But I think we have reached a final point. It is either they leave the Catholic Church or obey the Pope. There is no room in between,” he told SaharaReporters.
Although Mr. Okorocha promised the priests he will intervene in the matter, he did not disclose how. The deadline for the letters of apology to the Pope and acceptance of Bishop Okpalaeke is 9 July.