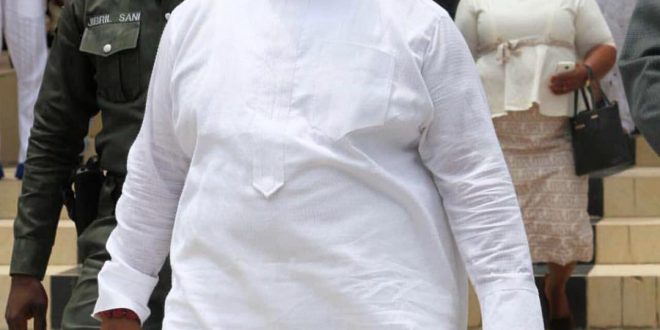 Adeleke Lands In Police Custody, Hours After Being Granted Permission By Court To Travel

Idowu Hamed May 7, 2019 HEADLINE, NEWS Comments Off on Adeleke Lands In Police Custody, Hours After Being Granted Permission By Court To Travel 32 Views

According to a report by The Sun, Senator Ademola Adeleke of the Peoples democratic Party PDP, has been arrested by the police in Abuja. He is currently in custody.

The senator who was arraigned in a Federal High Court in Abuja where he was granted permission to travel to the United States on health grounds was taken into custody at about 5 o’clock this evening.

As at the time of going to press, it was not clear why Adeleke was being detained.

it is understood that the permission he was given to travel was on health grounds.

Justice Inyang Ekwo gave the permission while ruling, on Friday on a motion ex-parte filed by the Senator.

The judge restrained the police from preventing Adeleke, who is being tried, with some others, on charges relating to examination fraud, from engaging in the foreign trip.

The judge said, in an enrolled order sighted on Monday, that: “An order of this honourable court is hereby made directing the Deputy Chief Registrar of honourable court to release to the 1st defendant/applicant his international passport to enable him travel to the United States of America on 7th day of May of 2019 and return on the 9th day of June 2019 to enable him undergo urgent medical check-up.

“The 1st defendant (Adeleke) is ordered to respond to the invitation of the respondent on 6th May 2019.

“Thereafter, the 1st defendant is granted leave of court to travel out of Nigeria to the United States of America between 7th May 2019 and 9th June 2019 for medical attention.

“The 1st defendant/applicant is hereby ordered to return the international passport to the Registry of this court within three days of his return on 9th June 2019.

“The respondent shall not prevent the 1st defendant from traveling for medical attention upon attending the invitation of the respondent on 6th May 2019.”

Justice Ekwo adjourned till June 10, 2019 for the continuation of trial in the criminal proceedings.

This comes a day after the Peoples Democratic Party raised the alarm over an alleged fresh plot by the All Progressives Congress to use some policemen to incarcerate its Osun State governorship candidate in the 2018 election, Ademola Adeleke.

It claimed that the plot was aimed at forcing Adeleke to relinquish his mandate.

The party’s National Publicity Secretary, Mr Kola Ologbondiyan, made the allegation in a statement made available to journalists in Abuja.

He said, “The PDP already has new information of how the APC, having seen that there is no way it can stop Adeleke at the courts, now seeks to forcefully hound him into a police station where he will be incarcerated and put out of circulation before the determination of the matters in court.

“Apart from executing this script of the APC, these elements in the police have no other reason for continuously hounding Senator Adeleke, as he is already in court for all the frivolous allegations preferred against him.

“If they truly want Senator Adeleke for any new issue connected with the charges for which he is already in court, they should present such before the court instead of resorting to bullying.

“Nigerians will recall that the PDP had earlier alerted of threats to Senator Adeleke’s life. These threats have not only continued unabated but have heightened with this renewed hounding by these elements in the police, who are being used by the APC.”