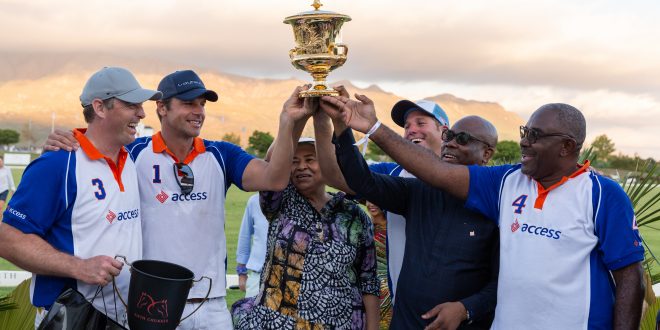 According to a release e-signed and made available to StarTrend Int’l & online – www.startrendinternational.com by Abdul Imoyo {I}, Team Lead, Media Relations, Access Bank Plc,
the event held to further create awareness and raise funds to support the education of underprivileged children in Africa.

In partnership with Fifth Chukker, through the Nelson Mandela Foundation, the initiative further deepened the Bank’s commitment towards impacting the environment and positively affecting the lives of underprivileged children in Africa.

Group Managing Director, Access Bank PLC, Herbert Wigwe who led other top officials of Access Bank to the event, expressed delight that the Charity tournament is achieving its main objectives.

“About 12 years ago, we decided to act and positively impact the lives of underprivileged children in Africa, including South Africa. The first Charity Tournament saw us impacted on 400 children and now, the number has grown to 12,000 children who have been educated across the northern part of Nigeria. Henceforth, every December will be dedicated to this cause; we will set aside money to support underprivileged children in South Africa through the Nelson Mandela Foundation,” Wigwe said.

Chief Executive Officer, Access Bank South Africa, Sugendhree Reddy said, “This successful engagement was made possible because of the opportunities provided by the South African government to establish our presence in this relatively new market. Access Bank is here to deliver value and excellent service to customers in South Africa. Hence, we will collaborate with all stakeholders to create optimal solutions and serve as Africa’s gateway to the rest of the world.”

The event saw hundreds of game enthusiasts who thronged the venue to watch the beautiful game of Polo, as teams competed for the Access Bank Gold Cup and Emily Aig-Imoukhuede Memorial Cup – commissioned by Fifth Chukker in memory of one of Nigeria’s most accomplished women and former President of the National Council of Women Societies, Emily Aig-Imoukhede.

The Bank also donated the sum of R360,000 to the Nelson Mandela Children’s Trust Fund (NMCF), while funds generated from the sale of artworks at the event also went to the Foundation.

Access Bank has been at the forefront of creating awareness and supporting the education of underprivileged children in Africa through raising much needed funds for organisations such as UNICEF for this purpose.