Breaking News
Home / BUSINESS / Abiodun Says, “We Are Committed To Lifting Our People Out Of Poverty”, As He Receives AfDB Boss, Dr. Akinwunmi Adesina In Office 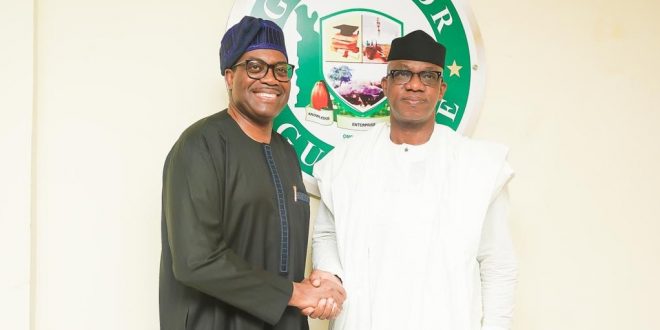 Abiodun Says, “We Are Committed To Lifting Our People Out Of Poverty”, As He Receives AfDB Boss, Dr. Akinwunmi Adesina In Office

Idowu Hamed January 3, 2020 BUSINESS, HEADLINE, NEWS Comments Off on Abiodun Says, “We Are Committed To Lifting Our People Out Of Poverty”, As He Receives AfDB Boss, Dr. Akinwunmi Adesina In Office 35 Views 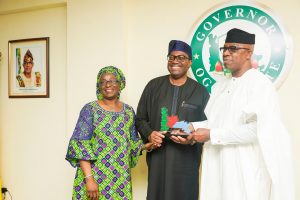 ABEOKUTA: The Ogun State Governor, Prince Dapo Abiodun has reaffirmed the commitment of his administration to lifting its people out of poverty, noting that his administration would continue to look at ways to ensure that it enjoys a mutually beneficial relationship with the Africa Development Bank (AfDB).

Prince Dapo Abiodun, who made this known when he received the President of the AfDB, Dr. Akinwunmi Adesina in his Oke-Mosan, Abeokuta office, expressed his appreciation to the Bank for choosing the State as one of the special agro-processing zones in terms of Agriculture.

He noted that there was no reason for the State not to be the food basket of the country, adding that it has everything going in its favour – with a land mass of about 16,000 square kilometres, out of which 12,000 is arable.

His words, “I want to thank you for all you have been to us in the State, particularly your wise counsel on so many things that we’ve wanted to embark on. I want to reassure you that our commitment to lifting our people out poverty is total, and that is why our vision is very clear about that.

“We want to thank you for choosing our State as one of the special agro-processing zones, in terms of Agriculture. There is no reason for us not to be the food basket of this nation. We have everything going in our favour. We have the land mass of about 16,000 square kilometres, out of which 12,000 square kilometres is arable. We will continue to look at ways and means to enjoy a mutually beneficial relationship”.

Abiodun also disclosed that his administration is at an advanced stage of implementing a new method of road construction in the State, adding that the process which had begun with three local government areas of the State would be fully utilised across the State from January 2020.

“We have begun to investigate an alternative road construction method. We started with three local government areas of the State. All we need to do is grade the roads, camper them, have drainages and put this chemical on them. It won’t cost us that much and we can do it on time. I am glad to say that we are going to begin that process this January. We’ve tested them, and they’ve passed the test,” he said.

The Governor also said that the State is prepared to have the processing zone fully operational with an airport location, adding that his administration will do all in its power to ensure that the State makes a success out of its Agric sector.

“We have an airport location that was meant to be an Agric airport and we think there is no better location for this special agro-processing zone. So we have the airport, and we have the special agro-processing zone that can now be a place of cross fertilisation of different companies, processing different agro and allied products. Rest assured, we will do everything that is required of us to make a success of our Agric sector,” Abiodun said.

In his remarks, the President, Africa Development Bank, (AfDB), Dr. Akinwunmi Adesina said that one of the five priorities of the Bank was to feed Africa, noting that feeding the continent requires making Agriculture a business that would create wealth and jobs.

He commended Governor Abiodun for his passion for Agriculture, assuring that the Bank would support the State Government to achieve its set goals in the Agric sector.

His words, “One of our five priorities in the Africa Development Bank is to feed Africa. Of course, to feed Africa means we must make Agriculture a business for creating wealth and also jobs and for reviving rural economic activities.

“The Governor has a clear strategy on that, and I assure him of my full support, and that of the Bank in supporting their work. We would like to support them to create a special Agro-industrial processing zone that would allow them to process all range of things from Agricultural produce. We are also looking at forest products as well. It is going to be very important, so I think that thinking has started. The commitment is there from my side and also from the Governor’s side”.

Adesina noted that the special agro-processing zones would attract food and Agric businesses into rural areas that have already been enabled with basic infrastructures like water and power, adding that the presence of rural dwellers would help add value to everything that is produced in the rural areas.

“Generally, in the rural areas of Africa, we have a high level of poverty and that is actually structural in the sense that the productivity of Agriculture is quite low, so unless we have Agriculture working as a business, the farmers would not have where to sell their produce. Everybody would be coming out of the rural areas, all drifting into the urban areas. 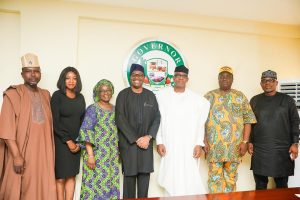 “So what the special agro-processing zone will do is to attract food and Agric businesses into rural areas that have already been enabled with basic infrastructure like water, power and roads, so they can process and add value to every single thing that is produced there.

“Obviously, that will expand the physical space in the rural areas. It will create quite a lot of jobs. It will reduce rural-urban drift,” he said.

"We Are Committed To Lifting Our People Out Of Poverty" Abiodun Says As He Receives AfDB Boss Dr. Akinwunmi Adesina In Office# 2020-01-03
Idowu Hamed

Tags "We Are Committed To Lifting Our People Out Of Poverty" Abiodun Says As He Receives AfDB Boss Dr. Akinwunmi Adesina In Office#