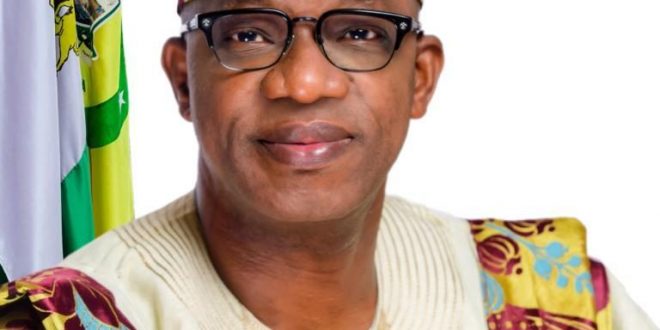 Abiodun Requests Take Over, Construction Of N26b Lagos-Ota-Abeokuta Road, Others

Ogun State Governor, Prince Dapo Abiodun had requested the Federal Government to hand over roads currently under construction to the state for completion.

Abiodun who stated this on Tuesday July 30, 2019 when he led a delegation of Ogun State elders to meet with President Muhammadu Buhari in Aso Rock Villa, added that Federal roads are under funded.

He specifically mentioned the Lagos – Ota – Abeokuta road, estimated to gulp about N26b to complete which he said stands to providing all the services that Lagos will need.

The governor stressed that the State government has plans for massive infrastructure development with some private sector players.

His words: “Our vision is to create an enabling environment for public private partnership.

“People must be able to move within the contiguous states. Sagamu to Ikorodu, Epe to Abeokuta, Lagos Ota Abeokuta road will cost N26b”, he said.

“Ogun, which is named Gateway State for its strategic positioning to other contiguous states of Lagos, Oyo, Osun is positioned to serve one of Africa’s biggest economies – Lagos.

“You cannot go from Lagos to anywhere else without going through Ogun State, we the gateway state stand to benefit from providing all the services that Lagos may need, that will also put us in a position where we should be the economic capital of this country”, he enthused.

Abiodun disclosed that Ogun state is the largest industrial hubs in Nigeria, with over 500 companies, saying, “Our contagiousness to Lagos, the access, the connection, are the connectivity between Ogun and Lagos”.

He stated further, “the state is focused on qualitative governance, whilst providing an enabling environment for a public, private sector partnership which we believe is fundamental to economic growth of the state and individual prosperity of the citizens.

“We must ensure that access, the connectivity , the ease with which people can move between Lagos, which has a primary port and Ogun which is a processing zone and Lagos which is also the market, people must be able to move with relative ease between Lagos and Ogun and between Ogun and other states. We border Republic of Benin, Oyo, Ondo and Osun states.

“So for us, when we realised that we were beginning to lose that relative ease, the Lagos-Ibadan Expressway today remains the primary link between Lagos and the rest of the country.

“That road is under construction, but you will notice that corridor has far developed in excess of what was anticipated when that contract was awarded.

The Governor noted that, “while the state appreciate what the Federal government is doing, particularly round the whole country, but we know that there is limited funds available to put in all projects.

“Today, Shagamu to Ikorodu, Lagos-Ota-Abeokuta are Federal roads which are grossly underfunded.

“The Lagos-Ota-Abeokuta which was contracted in 2001, is yet to be completed. The road is on its fourth agendum, and this year, the budget for that road is about a billion naira. That road requires another N26 billion to complete and we know we cannot burden the Federal government, so, we are graciously asking them, ditto for Shagamu-Ikorodu. Those roads are extremely important to us.
“If the Shagamu-Ikorodu road is also given to us, it will ease the traffic that is going on the Lagos-Ibadan expressway.

“If we construct Epe-Ijebu Ode road, it means people coming from East and from Ijebu no longer have to go through the Lagos-Ibadan Express Way.

“Also, if you look at the corridor that goes from Lagos-Abeokuta, if that road is indeed completed, it means all these roads will suffer less wear and tear. That same road goes to Agbara which is one of our biggest industry hub,” Abiodun posited.