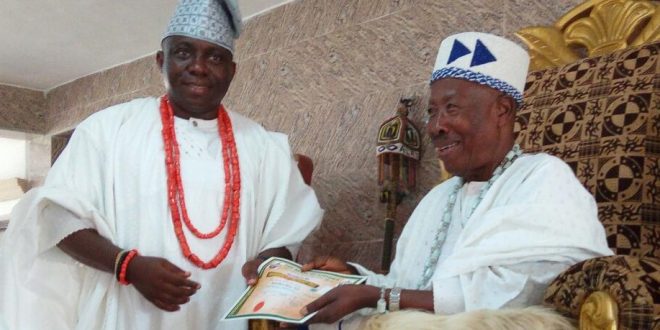 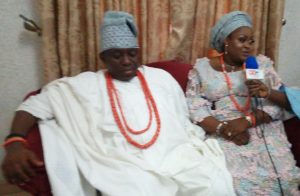 The Ogun State Governor, Prince Dapo Abiodun has reassured good people of the state of his commitment to electoral promises made during his electoral campaign.

The Governor who gave the reassurance while speaking during a grand reception in honour of the former Speaker, Ogun State House of Assembly, Rt. Hon. Suraj Ishola Adekunbi pointed out that his government would be an all inclusive government that would carry all stakeholders and citizen of the state along throughout his administration.

He made this statement at the conferment of chieftaincy title on Adekunbi by the Alaye of Ayetoro Oba Abdul Azeez Ishola Adelakun.

In his personal message, the 9th Speaker of Ogun State Assembly who congratulated Hon. Adekunbi for his 8years successful tenure in office as Speaker, Ogun State House of Assembly, said that Adekunbi tried his best for the development of the state and was very obedient to the former Governor, Senator Ibikunle Amosun.

He said that despite the quality support given the former Governor by the former Speaker, Amosun refused to fulfill promises made to Adekunbi, most especially in the area of physical development of Ogun West.

The ninth assembly speaker further pointed out that Senator Amosun did not do well to the just concluded eighth assembly.

Earlier, while decorating the former speaker with chieftaincy title of Aremo Oba of Ayetoro and his wife as Yeye Aremo of Ayetoro, the Alaye of Ayetoroland, Oba Abdul Azeez Ishola Adelakun described Adekunbi as a proud son of the town who has contributed in great measure to the economic and social growth of Ayetoro and its environs.

In his welcome address at the reception, the chairman planning committee of the event, Comrade Akinolu Adaraloye said that the speaker of the eight Assembly was a patrotic, courageous, and reliable royal ambassador of Ayetoro and Yewaland in general.

He said, “Hon. Adekunbi was voted in as a honourable member of Ogun State House of Assembly representing Ishokan State Constituency, but by the power of God coupled with the political arrangement in the state you were decorated as speaker to the house in the capacity you diligently served for a violent free eight solid years.

“Under this premise I give kudos to you as I sincerely salute your uncommon leadership attributes such as confidence, integrity, inspiration, humility, tremendous zeal, passion and focus”.

In their separate goodwill messages, the former governorship candidate of ADC in the last general election, Prince Gboyega Nasir Isiaka; former state Assembly Deputy speaker, Hon. Tola Banjo and a former member of the Assembly, Hon. Olayiwola Ojodu, described the former speaker as an intelligent, discipline and hard working person, pointing out that for him to have successfully worked with the former Gov. Amosun for eight years shows that their is something unique about him.

Responding, the former speaker while appreciating the people of his constituency for the overwhelming supports given to him while in office and people at the event said, ” to reciprocate your support, I believe I gave a good account of myself in the last eight years in the House of Assembly, turning into the most prolific legislature in the entire country.

“Recall that I inherited a house in crisis; polarize into G15 and G11, with each of the group going for the jugular of the order. We seem to forget the chamber itself was under lock and key for months until my emergence. I remain proud that we restored sanity in spite of the multi parties Assembly I resided over. 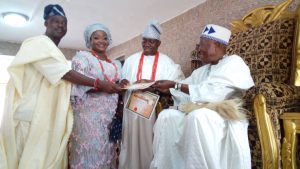 “I re-engineered the synergy with the Executive which resulted in the numerous project across the length and breathe of Ogun state. History will be kind to me for the countless sacrifices I made for the state to move on the path of development that marked my tenure as speaker of this great state”.

The former speaker further stated that, “today’s occasion is a befitting recognition of my giant stride as your mandate holder for two terms. The conferment of the Aremo Oba title is, to me, a greater call to service and I want to assure you that I will not let you down”.

The event which was graced by crème of the society from far and nesr took place at OGD/Asuje Hall, Ayetoro.