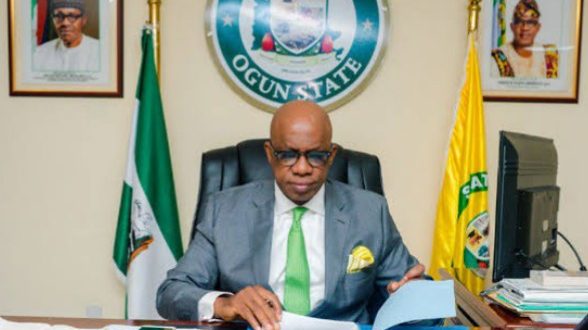 ABEOKUTA: The Ogun State Governor, Prince Dapo Abiodun has re-assured the people of the State that his administration would put all mercenaries in place to ensure that the prosperity of the citizens across the Senatorial districts in the state were improved.

According to a release signed and made available to StarTrend Int’l magazine & www.star trendinternational.com by Oluwaseun Boye, Press Officer, Office of the Deputy Governor, Governor Abiodun, represented by his Deputy, Engr. Noimot Salako-Oyedele, gave the re-assurance at a special thanksgiving service held to commemorate the 59th National Day celebration of Nigeria held at the Cathedral of St.Peter, Ake Abeokuta, said his administration would leave no stone unturned to improve the lives of the citizens by the expiration of his tenure in office.

The state helmsman pointed out that, efforts were on -going to improve the health sector, noting that approval had been given to the employment of more doctors and other health practitioners, refurbishement of state owned hospitals with the state of the art equipments, commenced the rehabilitation of road networks across the State as well flagged off the distribution of interest- free loan targeted at empowering the women as well as other initiatives in order to bring hope to the citizens.

Earlier in his sermon,the Bishop of Ijebu South West Diocese, Rt. Rev. Babatunde Ogunbanwo who took his anchor scripture from the book of 1Thessalonians Chapter 5 verse 15 admonished all to be thankful at all times and in every situation, adding that the sin of the nation is ingratitude. He said as Nigerians, there is need to be thankful and the thanksgiving must be from the depth of the heart saying pride in the heart, is a barrier to an acceptable thanksgiving.

Rev. Babatunde called on Nigerians to eschew evil, enthrone righteousness, and do away with selfish acts adding that both leadership and the led would give account of their stewardship before God ,advising politicians to rule with the respect for humanity.

While advising the Governor, Prince Dapo Abiodun, to beware of praise singers in the state, Bishop Ogunbanwo urged him to rule with all righteousness, saying righteous government will be fair to all, will not discriminate and will give hope to the poor.

Special Prayers were also offered for the President of Nigeria, Muhammad Buhari, the Governor of Ogun State, Prince Dapo Abiodun, Traditional Rulers and Political leaders in the State.

Dignitaries at the service included: former President of Nigeria, Chief Olusegun Obasanjo, Wife of the Governor, Mrs. Bamidele Abiodun, Secretary to the State Government, Mr.Tokunbo Talabi, Chief of Staff to the Governor, Alhaji Salisu Shusibu,Past and serving members of National and State Assembllies, Service Chiefs, Other past and current government functionaries, Traditional Rulers led by the Alake and Paramount Ruler of Egbaland, HRM Oba Adedotun Aremu Gbadebo amongst others.