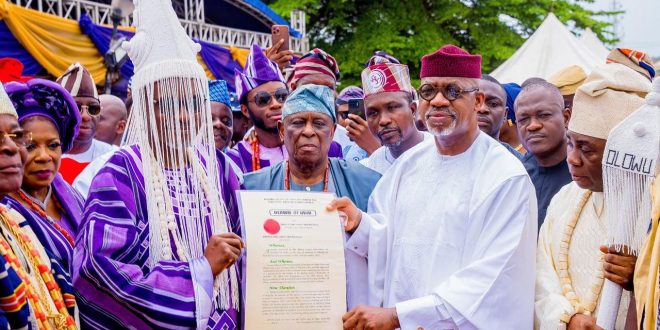 Abiodun Presents Staff Of Office To 14th Olowu, Tasks Him On Development Of Domain (+photos) 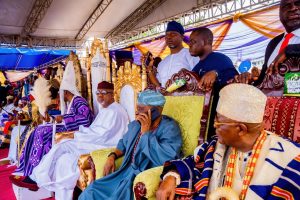 ABEOKUTA – Ogun State governor, Prince Dapo Abiodun, has charged the 14th Olowu of Owu, Oba (Prof.) Saka Matemilola, to see his installation as a call to service towards the development of Owu Kingdom and the state in general.

Abiodun stated this on Saturday, October 29, 2022 at the presentation of instrument of office to the new monarch.

Speaking at the coronation and the 23rd Edition of Owu Day Celebration held at the Oba Adeleye Park, Sokori, Abeokuta, Abiodun equally charged the new monarch to join hands towards achieving its vision of building the future of Ogun State, especially now when his administration has charted a new economy blueprint for the state. 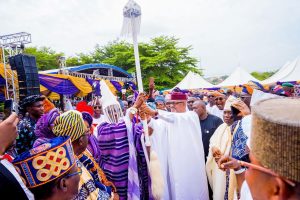 The governor described Owu people as intelligent, resourceful and highly cerebral who have evolved over the years to become a force, not only in Yorubaland, but the entire nation.

He noted that the unbroken bond between the Owu people must be recognized, especially after Orile Owu was devastated in the 1820s during the Yoruba inter-tribal wars.

Abiodun pointed out that the long history of the Owu people’s triumph over adversity, resilience in the face of opposition and crass demonstration has made them as one, united, indivisible and proud entity. 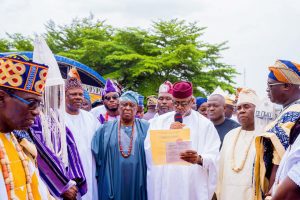 “Indeed, wherever we find the Owu people, you see them excelling. Whether in Osun, their primordial ancestral homestead, through Kwara, Oyo, Lagos, Ogun and even in Ondo states. One is always faced with a unique species of mankind – indomitable, valiant, loyal, strong-willed, tenacious, highly outspoken, principled and most resourceful”, the governor noted.

The governor described the new Olowu as a man of honour and integrity whose vast experience and intellectual prowess would bring in immense growth to the kingdom.
He implored sons and daughters of the kingdom to support the traditional ruler in his developmental agenda to take the town to greater heights. 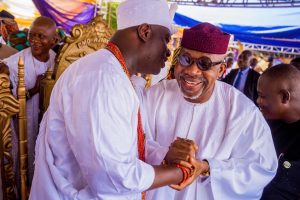 While assuring equal treatment of all parts of the state in project execution, Governor Abiodun also assured that his administration remained committed towards the successful implementation of its ISEYA Agenda, charging the people of Owu Kingdom to discharge their civic responsibilities peacefully as the 2023 election is fast approaching.

He commended those who contested for the stool with the new monarch for being orderly and the Planning Committee of the Odun Omo Olowu and other stakeholders who contributed to the success of the annual festival, maintaining that the large turn out of Owu indigenes at the coronation event was a confirmation to the acceptability of the new Olowu. 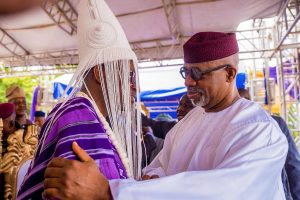 In his remarks, the chairman, Abeokuta North Local Government Area, Abdulsam Ayorinde, expressed optimism that the crowning of Oba Matemilola, would usher in a new era of development in Owuland and its environs, urging the indigenes to rally round the traditional ruler for the peace and development of the town.

The Balogun of Owu and former President, Chief Olusegun Obasanjo, represented by the Otun of Owu, Chief Doja Adewolu, described the new monarch as a man of wisdom, knowledge and good character who rose to the top of his career, expressing the hope that he would steer the ship of the town to greater height.

In his acceptance speech, Oba Matemilola assured all sons and daughters of Owu kingdom that he would lead the way and facilitate the growth of the kingdom, calling on groups, religious leaders and individuals in the kingdom to play their part with trust, dedication and unity. 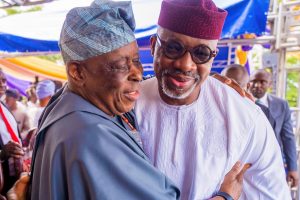 According to Oba Matemilola, the Olowu stool is unique and comes with great responsibilities, promising to live up to the virtues, principles and values as exemplified by his predecessors.

The event was attended by dignitaries from all walks of life including former governors, Olusegun Osoba, Senator Ibikunle Amosun, top government functionaries, traditional rulers including the Ooni of Ife, Oba Enitan Ogunwusi, the Obong of Calabar, Olu of Warri, the Alake of Egbaland , Oba Adedotun Aremu Gbadebo and other traditional rulers. 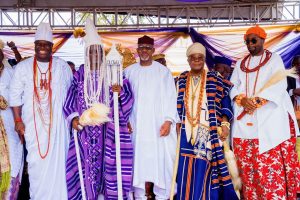 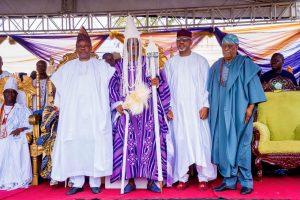