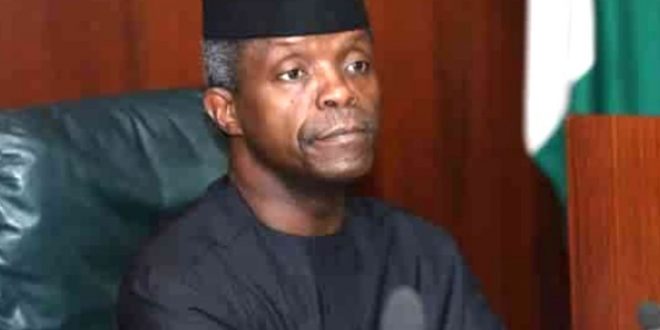 ABUJA – Barely six months after the District Head of Gui (a community in the Abuja Municipal Area Council of the FCT), Alhaji Alhassan Yusuf, called the attention of authorities to the lack of adequate education facilities in his community, the Federal Government has responded with the completion of six blocks of classrooms for the community.

According to a release e-signed and made available to StarTrend Int’l & online – www.startrendinternational.com by Arukaino Umukoro, Special Assistant to the President on Communication Projects, Office of the Vice President, the project executed by the Presidency, through the Office of the Senior Special Assistant to the President on Sustainable Development Goals (OSSAP-SDGs), will cater for the educational needs, especially the secondary school the community had long yearned for, according to the Gui District Head.

The District Head had, on March 14, 2020, drawn the attention of authorities to the state of infrastructure in the community’s only school when Vice President Yemi Osinbajo, SAN, visited the area to commiserate with the community on the loss of one of their sons, Ali Gomina, who was a police escort rider attached to his office.

Speaking to journalists on Saturday after a tour of the newly completed blocks of classrooms, the visibly elated community leader reserved special commendations and prayers for the Vice President, at whose prompting the project was completed within a short time.

According to Yusuf, “I really appreciate our Vice President who has bailed this community out of the poverty of education.

“This community is 6 kilometres away from the only secondary school in this area, located at Sauka, along the main expressway, and the road is really bad. During the raining season, our children find it difficult to go to school at Sauka because of the bad road.

“So, when we lost our son, Ali Gomina, and the Vice President came to condole with us, I raised the issue of a secondary school for our community, and a day after I made that request, the project was approved. Work started on the project barely six months ago and it has been completed already.

“What is left now is for the Ministry of Education to come and supervise the operation of this school. With the number of classrooms in this school, we hope to have both junior and senior secondary classes in this school.”
Expressing his sincere gratitude to the VP, Yusuf said “Once again, on behalf of Gui community, I sincerely thank the Vice President for what he has done. We pray that God will continue to protect him both in and out of office.”

On the sideline of Saturday’s tour of the school project was the donation of a 3-bedroom bungalow and a store to the family of late Police Inspector Ali Gomina, an escort rider attached to Vice President’s office.
The presentation of the building was in fulfilment of an idea conceived when the Vice President paid a condolence visit to the deceased family and Gui community in March 2020.

Amidst praises and cheers from elders and members of Gui community, the Deputy Chief of Staff to the President (Office of the Vice President), Mr Ade Ipaye, presented the new house to the family of the deceased police officer.
Fielding questions from journalists after the presentation, Ipaye said, “it is a welcome outcome for the family and the community.”

According to him, “they suffered a great loss when one of their rising stars, their son, was unfortunately killed in a motorbike accident earlier in the year. He left behind a large family. His Excellency the Vice President was here to commiserate with them and in that occasion, the issue of a building for the family was mooted and His Excellency kept that in mind and ensured that it has become a reality.

“I see that the District Head, the family and community are happy with this. Not only does the family have a bungalow, they also have a shop where they can do some trading activities and be able to sustain themselves. We thank God that this has come to pass.”

Also speaking after the tour of the project, a representative of the OSSAP-SDGs, in the Presidency, Mr Danjuma Dauda, said the project was executed in line with the Goal 1 of the Sustainable Development Goals (SDGs) which is targeted at eradicating poverty and improving the quality of education.
Gomina, 45, was killed in a motorbike accident on March 13, 2020, while leading Vice President’s motorcade enroute the Nnamdi Azikiwe International Airport, Abuja.

With the Deputy Chief of Staff during the visit and presentation were the Senior Special Assistant to the President on Media and Publicity, Office of the Vice President, Mr. Laolu Akande, and the Special Assistant-Community Engagements, Ms. Toyosi Onaolapo, among other top government officials.