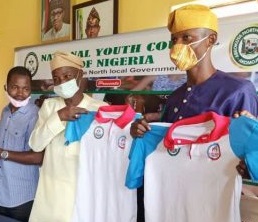 The Coordinator of the NYCN, Abeokuta North Branch, Comrade Emmanuel Enitan Ojo admonished the beneficiaries to make good use of the training, exposure for the betterment of the larger society.

He gave this admonition after half term evaluation visit to the various locations where the beneficiaries had in the last three months been undergoing training in vocations.

Ojo who expressed delight about the conduct and behaviour of the beneficiaries said “indeed, we have touched and affected the life of some of our youths positively through this empowerment training.

He said all of them are doing great in their various training centres, just in three months, they can now stand on their own without depending on anybody.

Ojo however expressed optimism that at the end of the six months training, many of them would have become professional in their chosen carriers and vocations, noting that it was imperative to engage our teeming youths on entrepreneurship skills.

“In fact, this kind gesture of empowerment will reduce spate of unemployed youth that are roaming around the streets, especially the graduate ones in our society at large,” Ojo said.

Also speaking, the representative of the Foundation, Mrs. Bukola Bisiriyu hailed the trainees for their steadfastness, emphasizing that at the end of the programme the foundation would procure necessary tools they needed, so as to stand on their own.

“Let me assure you that we will not renage on our promises, already we have made available some of the tools, such as Sewing Machines, Washing Basin and Hair Dryers to NYCN, by the grace of God the remaining of other tools will be provided before the programme ends in the next three months,” Bisiriyu said.

Responding on behalf of the beneficiaries, Robiu Hasbiyallah Opeyemi who was learning Graphic Design thanked both the NYCN and the foundation for giving them the opportunity and sparing a thought for them by making them self-reliant and useful to the society.