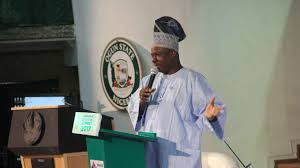 Residents and indigenes of Ogun woke up on Thursday September 6, 2018 to the news that Governor Ibikunle Amosun has finally adopted, Mr. Abdulkabir Abiodun Akinlade as his preferred successor, the much awaited “whizkid” he had promised to expect from the West Senatorial District.
Akinlade who hails from Ipokia is currently representing Egbado South/Ipokia in the House of Representatives.
With the adoption by the Ogun West Elders following what many believed was a product of a behind-the-scene influence of the Governor, there is no more guessing who Amosun’s whizkid or successor he had said would accompany him to 2019 Eid prayers.
Akinlade was later presented today at a press conference as the “APC flag bearer”
It was scooped that the decision to field had been taken by Governor Amosun and members of his kitchen cabinet in May in Saudi Arabia during this year’s Umrah and that all the elective positions especially in the West and Central Senatorial Districts were allocated to different individuals and that in the event of any primaries, they would be the one to support.
Will the choice of Akinlade, a product of the governor and the elder in one senatorial district, be acceptable to the array of Governorship aspirants in the party especially when only on Wednesday, September 5, 2018 the party caucus which included all the aspirants had agree that direct primaries would be held where consensus fails?
The development may completely tear the party apart as some of the aspirants including some in the Governor’s camp have cried foul and insisted on obtaining the form to face party members in the proposed direct primaries which determine the most popular aspirant.
In a swift reaction, Chief Dapo Abiodun said that the decision was undemocratic, unjust and unfair to all other governorship aspirants within the party especially when they were not duly consulted “before such decision was reached by the governor and his political group”
A statement issued by the Media Office of the Dapo Abiodun Campaign Organization said “the national body of our great party has made itself clear on the issue of primaries and instructed that all the states being ruled by APC must adopt the direct primary election method and that in a situation where such is not feasible, a resolution of any alternative primary election process should be forwarded to the national body for ratification and adoption
“Such resolution is expected to be taken by the critical stakeholders which includes all governorship aspirants without excluding any.


“At this time and age, it is somewhat amusing that Senator Ibikunle Amosun will gather some aspirants of just one senatorial district and unilaterally decide and announce a purported and sham con-census. It is worthy to note that at no point did Prince Dapo Abiodun and many stakeholders of our dear state receive any official or unofficial invitation to attend the stakeholders meeting where the issue was discussed.
“We therefore call on our supporters and the general public to completely ignore and disregard this make believe political narrative being sponsored from within the government of Amosun against Prince Dapo Abiodun”
Another Governorship aspirant from Yewa was of the opinion that the choice of Akinlade was unacceptable saying, “Kunle that has not related with his constituents since he became the Rep not to talk of Senatorial District.
‘‘Honestly I don’t believe that the governorship has been technically shifted to Ogun East. I am going ahead to obtain my nomination form”
2019: Amosun’s Choice Of Akinlade Threatens Ogun APC’s Cohesion# 2018-09-06
Idowu Hamed